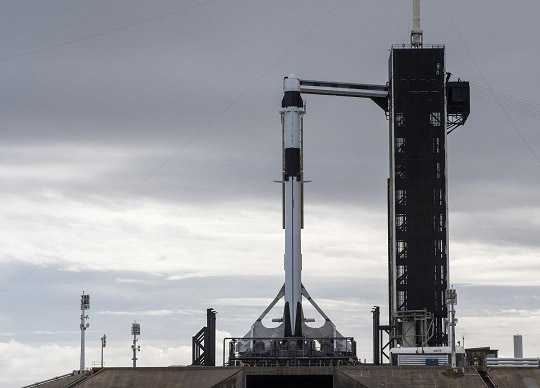 Image: A SpaceX Falcon 9 rocket, with the company’s Dragon cargo spacecraft atop, is raised to a vertical position at NASA Kennedy Space Center’s Launch Complex 39A on Nov. 21, 2022, in preparation for the 26th commercial resupply services launch to the International Space Station. Credits: NASA.

Live launch coverage will begin at 2 p.m., on NASA Television, the NASA app, and the agency’s website. Follow all events at: https://www.nasa.gov/live

The mission’s launch attempt on Nov. 22 was scrubbed due to poor weather conditions along Florida’s Space Coast.

Liftoff will be from Launch Complex 39A at the NASA’s Kennedy Space Center in Florida. SpaceX’s Dragon cargo spacecraft will deliver new science investigations, supplies, and equipment for the international crew.

The Dragon spacecraft will deliver a variety of NASA investigations, including the next pair of International Space Station Roll Out Solar Arrays (iROSAs), which will augment power to the orbiting laboratory. The spacecraft also will carry a study to grow dwarf tomatoes to help create a continuous fresh-food production system in space, as well as an experiment that tests an on-demand method to create specific quantities of key nutrients.

For a Nov. 26 launch, arrival to the station is scheduled for 7:30 a.m. EST on Sunday, Nov. 27. The Dragon spacecraft will dock autonomously to the forward-facing port of the station’s Harmony module.

The spacecraft is expected to spend about a month attached to the orbiting outpost before it returns to Earth with research and return cargo, splashing down off the coast of Florida.

Full coverage of this mission is as follows (all times Eastern):

Coverage is subject to change based on real-time operational activities. Follow the International Space Station blog for updates.

For downlink information, schedules, and links to streaming video, visit:

On launch day, a “tech feed” of the launch without NASA TV commentary will be carried on the NASA TV media channel.

Launch day coverage of the mission will be available on the NASA website. Coverage will include live streaming and blog updates beginning no earlier than 2 p.m. Saturday, Nov. 26, as the countdown milestones occur. On-demand streaming video and photos of the launch will be available shortly after liftoff.

Members of the public can register to attend this launch virtually. Registrants will receive mission updates and activities by email. NASA’s virtual guest program for this mission also includes curated launch resources, notifications about related opportunities, and a virtual guest passport stamp following a successful launch.

Let people know you’re following the mission on Twitter, Facebook, and Instagram by using the hashtags #Dragon, #CRS26, and #NASASocial. You can also stay connected by following and tagging these accounts: