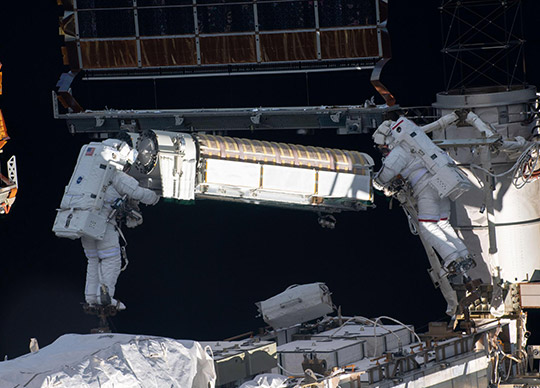 Astronauts aboard the International Space Station will conduct a series of U.S. spacewalks in November and December to install mounting hardware and a pair of rollout solar arrays to increase electrical power to support station operations and scientific research.

NASA will preview the upcoming International Space Station Rollout Solar Array (iRosa) spacewalks and provide coverage of all three live on NASA Television, the NASA app, and the agency’s website.

At 2 p.m. EST Monday, Nov. 7, NASA will host a preview of the spacewalks at the agency’s Johnson Space Center in Houston, with the following agency participants:

Media wishing to participate in the news conference in person must request credentials from the Johnson newsroom no later than 5 p.m. EDT Friday, Nov. 4 at: 281-483-5111 or jsccommu@mail.nasa.gov. Media interested in participating by phone must contact the Johnson newsroom no later than two hours before the start of the call. Those wanting to submit a question on social media may do so using #askNASA.

On Tuesday, Nov. 15, NASA astronauts Josh Cassada and Frank Rubio will exit the station’s Quest airlock to assemble a mounting bracket on the starboard side of the station’s truss assembly. Live coverage of the spacewalk will begin at 6:30 a.m. The spacewalk is scheduled to begin at 8 a.m. and last about seven hours.

The next two U.S. spacewalks are scheduled on Monday, Nov. 28, and Thursday, Dec. 1. On Nov. 28, two astronauts will install an iROSA for the 3A power channel, and on Dec. 1 a pair of astronauts will install an iROSA on the port truss for the 4A power channel. These will be the third and fourth iROSAs out of a total six planned for installation. The iROSAs will increase power generation capability by up to 30%, increasing the station’s total available power from 160 kilowatts to up to 215 kilowatts.

NASA will confirm astronaut roles and start times for the Nov. 28 and Dec. 1 spacewalks after the first spacewalk is completed.