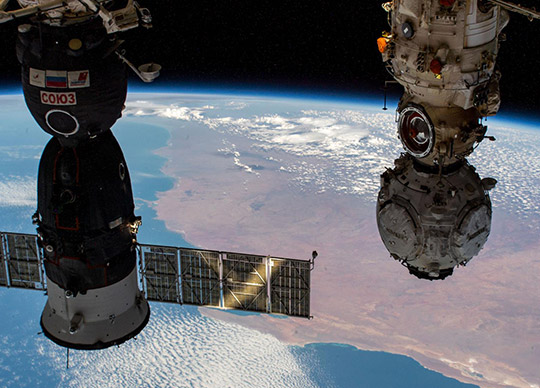 Image: Soyuz MS-19 crew spacecraft and the Nauka Multipurpose Laboratory Module with the Prichal docking module attached as the International Space Station orbited 266 miles above the Indian Ocean off the western coast of Australia. NASA.

Two Russian cosmonauts will venture outside the International Space Station at about 7 a.m. EST Wednesday, Jan. 19, to conduct a spacewalk to ready the new Prichal module for future Russian visiting spacecraft.

Live coverage of the spacewalk will begin at 6 a.m. on NASA Television, the NASA app, and the agency’s website.

Expedition 66 Commander Anton Shkaplerov and Flight Engineer Pyotr Dubrov of Roscosmos will begin the planned seven-hour spacewalk by exiting the Poisk module on the space-facing side of the station’s Russian segment. During the spacewalk, the cosmonauts will install handrails, rendezvous antennas, a television camera, and docking targets on Prichal, which automatically docked to the Nauka multipurpose laboratory module in November.

A Soyuz spacecraft carrying three cosmonauts, who will be part of the Expedition 67 crew, is the first scheduled docking to Prichal, planned for March.

Shkaplerov will serve as extravehicular crew member 1 (EV1) and will wear a Russian Orlan spacesuit with red stripes. Dubrov will wear a spacesuit with blue stripes as extravehicular crew member 2 (EV2). This will be the third spacewalk in Shkaplerov’s career and the fourth for Dubrov. The first spacewalk at the station in 2022 also will be 246th spacewalk for space station assembly, maintenance, and upgrades.

Additional spacewalks are planned this spring to outfit a European robotic arm on the Nauka laboratory and to activate Nauka’s airlock for future spacewalk activity.