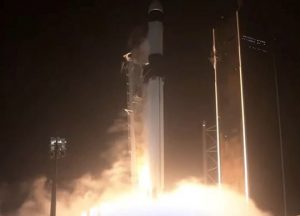 Image: A SpaceX Dragon resupply spacecraft launches on a Falcon 9 rocket from Launch Pad 39A at Kennedy. Photo: NASA

A SpaceX Dragon resupply spacecraft carrying more than 6,500 pounds of science experiments, crew supplies, and other cargo is on its way to the International Space Station after launching at 5:07 a.m. EST Tuesday from NASA’s Kennedy Space Center in Florida.

The spacecraft launched on a Falcon 9 rocket from Launch Pad 39A at Kennedy for the company’s 24th commercial resupply services mission for NASA. It is scheduled to autonomously dock at the space station around 4:30 a.m. Wednesday, Dec. 22, and remain there for about a month.

Among the science experiments Dragon is delivering to the space station are:

Bioprinting uses viable cells and biological molecules to print tissue structures. The German Aerospace Center study Bioprint FirstAid demonstrates a portable, handheld bioprinter that uses a patient’s own skin cells to create a tissue-forming patch to cover a wound and accelerate the healing process. On future missions to the Moon and Mars, bioprinting such customized patches could help address changes in wound healing that can occur in space and complicate treatment. Personalized healing patches also have potential benefits on Earth, providing safer and more flexible treatment anywhere needed.

Monoclonal antibodies, used to treat a wide range of human diseases, do not dissolve easily in liquid and so typically must be given intravenously in a clinical setting. The Center for the Advancement of Science in Space Protein Chystal Growth 20 (CASIS PCG 20) experiment continues work on crystallizing a monoclonal antibody, pembrolizumab, that Merck Research Labs developed. It is the active ingredient in Keytruda, a drug that targets multiple cancers. Scientists analyze these crystals to learn more about the structure and behavior of the component to create drug formulations that can be administered at a doctor’s office or even at home.

Scientists have observed that spaceflight sometimes increases the virulence of potentially harmful microbes and reduces human immune function, increasing the risk for infectious disease. Host-Pathogen assesses space-induced changes in immune status by culturing cells collected from crew members before, during, and after spaceflight with both “normal” bacteria and bacteria grown under simulated spaceflight conditions. Results could help assess the potential risk infectious microbes may pose and may support development of countermeasures. This could improve care for those with compromised immune systems on Earth.

Multi Variable Platform (MVP) Plant-01 profiles and monitors the development of the shoots and roots of plants in microgravity. Plants could serve as a vital part of human life support systems for long-duration spaceflight and habitation of the Moon and Mars. However, space-grown plants experience stress from various factors and recent studies indicates changes in plant gene expression in response to those stressors. Improved understanding of these changes could enable the design of plants that are better suited for growth in spaceflight environments.

Astronauts on the space station wear items of clothing several times, then replace them with new clothes delivered on resupply missions. Limited cargo capacity makes this a challenge, and resupply is not an option for longer missions, such as those to the Moon and Mars. In a collaboration with NASA, and sponsored by the ISS National Laboratory, Proctor & Gamble has developed Tide Infinity, a fully degradable detergent specifically designed for use in space, and the P&G Telescience Investigation of Detergent Experiments (PGTIDE) study the performance of its stain removal ingredients and the formulation’s stability in microgravity. Once proven in space, Tide plans to use the new cleaning methods and detergent to advance sustainable, low-resource-use laundry solutions on Earth.

Parts made in space

Turbine Superalloy Casting Module (SCM) tests a commercial manufacturing device that processes heat-resistant alloy parts in microgravity. Alloys are materials made up of at least two different chemical elements, one of which is a metal. Researchers expect more uniform microstructures and improved mechanical properties in superalloy parts processed in microgravity compared to those processed on Earth. These superior materials could improve the performance of turbine engines in industries such as aerospace and power generation on Earth.

Students and citizens as space scientists

Students enrolled in institutions of higher learning can design and build microgravity experiments as part of NASA’s Student Payload Opportunity with Citizen Science (SPOCS). As part of their experiments, selected teams include students in kindergarten through 12 grade as citizen scientists. Citizen science allows individuals who are not professional scientists to contribute to real-world research. The NASA STEM on Station project is funding experiments flying on this SpaceX resupply mission, including a study on antibiotic resistance in microgravity from Columbia University in New York and one on how microgravity affects bacteria-resistant polymers from the University of Idaho in Moscow, Idaho.

These are just a few of the hundreds of investigations currently being conducted aboard the orbiting laboratory in the areas of biology and biotechnology, physical sciences, and Earth and space science. Advances in these areas will help keep astronauts healthy during long-duration space travel and demonstrate technologies for future human and robotic exploration beyond low-Earth orbit to the Moon and Mars through NASA’s Artemis program.