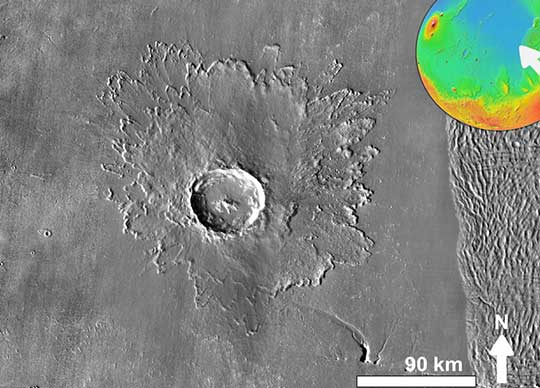 Curtin University researchers have pinpointed the likely origin of a group of meteorites ejected from Mars, using a machine learning algorithm that analyses high-resolution planetary images.

The new research, published in Nature Communications, identified meteorites that landed on Earth likely originated from Mars’ Tooting crater, located in the Tharsis region, which is the largest volcanic province in the solar system.

About 166 Martian rocks have landed on Earth over the past 20 million years, however their precise origins on Mars were unknown.

Lead researcher Dr Anthony Lagain, from Curtin University’s Space Science and Technology Centre in the School of Earth and Planetary Sciences, said the new findings would help provide the context to unravel the geological history of the Red Planet.

“In this study, we compiled a new database of 90 million impact craters using a machine learning algorithm that allowed us to determine the potential launch positions of Martian meteorites,” Dr Lagain said.

“By observing the secondary crater fields – or the small craters formed by the ejecta that was thrown out of the larger crater formed recently on the planet, we found that the Tooting crater is the most likely source of these meteorites ejected from Mars 1.1 million years ago. For the first time, through this research, the geological context of a group of Martian meteorites is accessible, 10 years before NASA’s Mars Sample Return mission is set to send back samples collected by the Perseverance rover currently exploring the Jezero crater.” 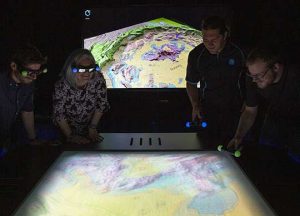 Co-Lead Professor Gretchen Benedix, also from Curtin University’s Space Science and Technology Centre, said the algorithm that made this possible was a major step forward in how scientists can use the terabytes of planetary data available.

“We would not have been able to recognise the youngest craters on Mars without counting the tens of millions of craters smaller than one kilometre across,” Professor Benedix said. “This finding implies that volcanic eruptions occurred in this region 300 million years ago, which is very recent at a geological time scale. It also provides new insights on the structure of the planet, beneath this volcanic province.”

Dr Lagain said the research would help create a better understanding of the formation and the evolution of Mars, as well as Earth, potentially offering benefits for other industry sectors on our planet. “Mapping craters on Mars is a first step. The algorithm we developed can be retrained to perform automated digital mapping of any celestial body. It can be applied to Earth to assist with managing”.