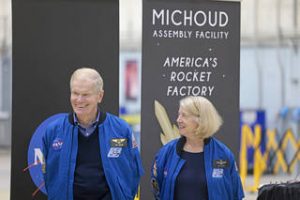 NASA Administrator Bill Nelson and Deputy Administrator Pam Melroy visited the agency’s Michoud Assembly Facility in New Orleans on Dec. 8, 2021 for tours and briefings on Michoud’s role in the Artemis program and other capabilities that enrich many facets of the nation’s space exploration endeavors.
Credits: NASA/Michael DeMocker

In 2021, NASA completed its busiest year of development yet in low-Earth orbit, made history on Mars, continued to make progress on its Artemis plans for the Moon, tested new technologies for a supersonic aircraft, finalized launch preparations for the next-generation space telescope, and much more – all while safely operating during a pandemic and welcoming new leadership under the Biden-Harris Administration.

“At NASA, we turn science fiction into science fact, and we do it daily. From continuing to launch astronauts to the International Space Station from American soil to landing the Perseverance rover on Mars and logging the first flight on another planet, 2021 was a banner year for the world’s premier space agency and all of humanity,” said NASA Administrator Bill Nelson, who was sworn into office May 3 by Vice President Kamala Harris. “Next year, NASA will accomplish more daring feats with new discoveries and technological advancements, especially as our Artemis I mission paves the way for future crewed missions to the Moon – and beyond.”

Among the many science accomplishments for the year, NASA continued preparations to launch the James Webb Space Telescope on Dec. 24 from French Guiana, successfully landed the Perseverance rover on the surface of Mars, and piloted the Ingenuity Mars Helicopter – the first powered, controlled flight on another planet.

NASA welcomed back to Earth the first two sets of commercial crew astronauts to complete expedition missions aboard the International Space Station and launched Crew-3 to the orbiting laboratory. During the Crew-2 mission, astronauts spent a U.S. record-setting 199 days in orbit, surpassing the 168 days set by Crew-1 mission earlier this year.

The agency advanced plans to explore more of the Moon through Artemis, pledging to send the first woman and first person of color to the lunar surface. To pave the way for future lunar missions with crew, NASA completed stacking of its Space Launch System rocket, with its Orion spacecraft for the Artemis I mission launching in spring 2022. In addition to other highlights, NASA also picked SpaceX to continue the development and demonstration of the first commercial human lunar lander.

NASA also took action to roll out aviation technology to more airports to help save time for passengers, pushing the boundaries of making aeronautics more green and more efficient.

Solar System and Beyond 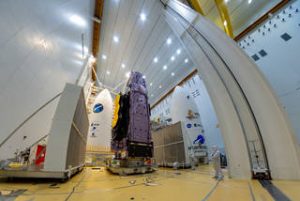 On Saturday, Dec. 11, NASA’s James Webb Space Telescope was secured on top of the Ariane 5 rocket that will launch it to space from Europe’s Spaceport in French Guiana.
Credits: ESA-M.Pedoussaut

Prior to the targeted Dec. 24 launch of the Webb Telescope, NASA this year completed testing and sent the telescope on a 5,800 mile journey by sea to its launch site in French Guiana.

Spacecraft and rovers already in space continued to help advance our understanding of the universe, providing a variety of new findings.

The Perseverance rover drilled, extracted, and sealed its first rock core into its sampling tube. The core now is enclosed in an airtight titanium sample tube, making it available for retrieval in the future.

The mission is the first step in the round trip Mars Sample Return campaign, being planned by NASA and ESA. 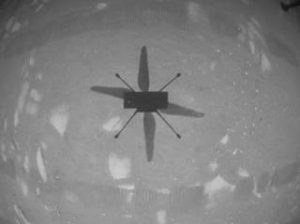 NASA’s Ingenuity Mars Helicopter took this shot, capturing its own shadow, while hovering over the Martian surface on April 19, 2021, during the first instance of powered, controlled flight on another planet.
Credits: NASA/JPL-Caltech

NASA researchers, facilities, instruments, and spacecraft were involved in many more scientific activities in 2021. Highlights this year included: 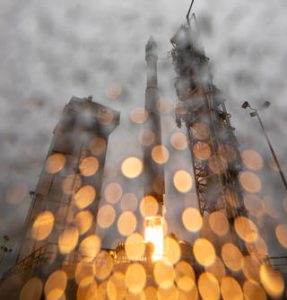 In 2021, NASA’s climate research continued to show how the planet is changing as the agency maintained its role as a leader in understanding climate change. Among the accomplishments in this area, the agency: This was the 21st continuous year of human presence aboard the International Space Station, and the busiest yet. NASA continues to send astronauts to the orbiting laboratory using commercial spacecraft launched from the agency’s Kennedy Space Center in Florida, as well as Russian Soyuz capsules launched from Kazakhstan. Among the accomplishments this year, the agency: Other activities supporting NASA’s Moon to Mars exploration approach included preparations toward future Artemis missions at the Moon with crew. The agency’s Artemis II mission is targeted to launch in 2024, and the Artemis III mission is aimed to launch no earlier than 2025. Among the accomplishments in this area in 2021, the agency: 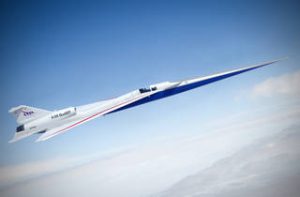 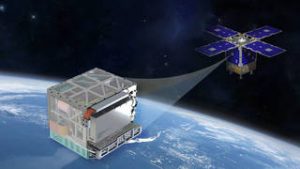 This illustration shows NASA’s Deep Space Atomic Clock technology demonstration and the General Atomics Orbital Test Bed spacecraft that hosts it. Spacecraft could one day depend on such instruments to navigate deep space.
Credits: NASA

This year, NASA advanced technology for exploration, with new concepts that can drive exploration of the Moon, Mars, and beyond – and benefit people here on Earth. Highlights included:

As part of its response to an executive order aimed at advancing racial equity and support for historically underserved and underrepresented communities in federal government, NASA launched its Mission Equity initiative. The agency is reviewing nearly 200 public comments about how the agency can better engage untapped communities. NASA also:

Inspiration is the foundation of NASA’s public engagement program. As the COVID-19 pandemic continued to limit in-person events around the world, NASA’s virtual events and digital communications provided new opportunities to connect people around the world with agency content. Highlights in 2021 included:

NASA collaborates with a variety of partners, organizations, and stakeholders to highlight milestones and inspire the public about the agency’s missions:

The agency is streamlining its guest operations processes and continued to provide a hybrid model of both in-person and virtual guest opportunities for launches: