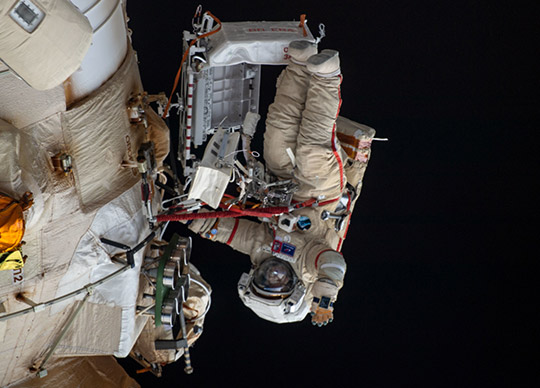 NASA will provide live coverage of a spacewalk on Thursday, July 21, by a Russian cosmonaut and an ESA (European Space Agency) astronaut to continue outfitting the European robotic arm on the International Space Station’s Nauka laboratory.

Coverage will begin at 9:30 a.m. EDT on NASA Television, the NASA app, and agency’s website. The spacewalk is scheduled to begin around 10 a.m.

Expedition 67 Commander Oleg Artemyev of Roscosmos and Flight Engineer Samantha Cristoforetti of ESA, clad in Russian Orlan spacesuits, will begin the six-and-a-half-hour excursion by exiting the space-facing Poisk module. The primary objective is to install platforms and workstation adapter hardware near the 37-foot-long manipulator system mounted to Nauka. The spacewalkers also will relocate the arm’s external control panel, replace a protective window on the arm’s camera unit, and extend a Strela telescoping boom from Zarya to Poisk to facilitate future spacewalks.

The European robotic arm will be used to move payloads and equipment outside the Russian segment of the station, joining the Canadian-built Canadarm2 robotic arm and the Japanese arm already supporting station maintenance, operations, and research.

One of the first tasks will see Artemyev and Cristoforetti deploy 10 nanosatellites designed to collect radio electronics data during the spacewalk, which will be the 251st in support of station assembly, maintenance, and upgrades.

Cosmonaut Oleg Artemyev waves to the camera while working outside the Nauka multipurpose laboratory module during a spacewalk on April 18, 2022, that lasted for six hours and 37 minutes to outfit Nauka and configure the European robotic arm on the International Space Station’s Russian segment. Credits: NASA.