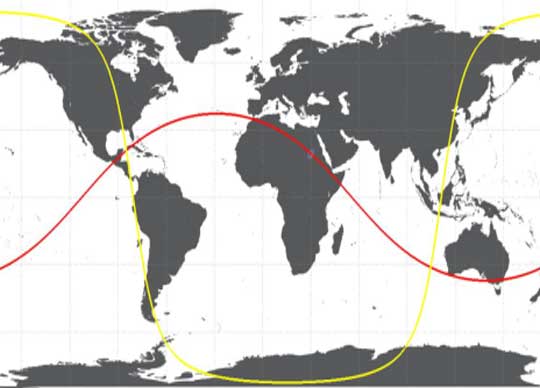 Kleos Space has presented a technical paper (outlined below) on the capability of its radio frequency geolocation technology at the GEOINT21 symposium in the USA – the largest annual conference for geospatial intelligence.

The following keypoints were released to the ASX:

Kleos’ CTO Vincent Furia explained, “In order to present our technical capability at the GEOINT21 symposium, we are releasing a technical paper regarding how the RF data captured by Kleos’ constellation of satellite clusters is processed into geolocation information for our customers. We also showcase a recent study performed over the Republic of Cabo Verde, which elicited results confirming expected high levels of accuracy obtainable from the geolocation system, using a data capture coming from the Scouting Mission (KSM1) cluster of 4 satellites. Kleos continues to develop and deploy a constellation of satellite clusters, delivering revisit rates over key areas of interest with ever increasing operational value to the user. With every new cluster added, further data is collected, creating a higher value data set accessible by the various government and commercial users.”

HE CAPABILITY OF ITS RADIO FREQUENCY GEOLOCATION TECHNOLOGY

The Geolocation System high level architecture is presented, and the geolocation system performance is provided based on a case study involving the Cape Verde VHF beacon and Kleos Scouting Mission (KSM1) cluster.

in a formation ensuring that all spacecraft receive the same RF signal whilst flying sufficiently distanced to ensure variation in the received signals required for the geolocation processing. The principal VHF Payload of each KSM1 spacecraft is a Software Defined Radio (SDR), with Very High Frequency (VHF) front-end

The Geolocation System is responsible for performing signal processing operations to detect and passively geolocate uncooperative targets transmitting in a frequency band of interest by using a set of receiving antennas at known positions. Passive geolocation is commonly achieved using techniques such as Time

RF data is collected and timestamped with high accuracy on-board the four spacecraft along with Attitude Determination and Control System (ADCS) data providing the spacecraft location and attitude. Upon downlink of the data, the Geolocation System time aligns all the received data and performs time and

frequency slicing. The slicing considers the frequency bands used in Very High Frequency (VHF) maritime mobile communications [1], as well as physical phenomena relative to the motion of the spacecraft cluster, and the waveform of the captured signal. The time and frequency sliced RF signal 𝑥𝑖 coming from

presence of a correlation peak provide the TDOA and FDOA measurements (II).

TDOA and FDOA measurements are then filtered using KSS proprietary algorithms to discard erroneous measurements caused by low Signal-to-Noise Ratio (SNR) values, interference, and false alarms raised by the CAF. Measurement filtering is done blindly (i.e., no beacons at known positions or signals with known pilot sequences are required) and increases the reliability of the measurements used for geolocation.

The more spacecraft, and hence measurements, the better the estimation accuracy of the geolocated position. The position estimation is performed using an iterative numerical nonlinear least-squares optimisation algorithm. Once the target position is obtained, the confidence ellipse parameters (semi-major axis, semi-minor axis, and orientation angle (Figure 4)) are computed by relying on the Dilution of Precision (DOP) concept, which depicts the relation between the spacecraft cluster, target geometry, and the Root Mean Square Error (RMSE) of the positioning errors.

After performing position estimation, the geolocation system provides: the carrier frequency of the detected transmitter, the mean reception time, the transmitter coordinates, and the confidence ellipse parameters.

The geolocation system performance is showcased using a data capture by the KSM1 cluster. The capture is taken during testing over the Republic of Cabo Verde (Cape Verde), where a Kleos Space SA (KSS) controlled beacon signal was transmitting at 4.2 W. The beacon signal comprises audio transmitted using

Analogue Frequency Modulation at 145.175 MHz. The estimated positions of the beacon have errors ranging from [0.32 km, 32km] (Figure 5). Each position has its own confidence ellipse. The confidence ellipse size depends on the DOP and the received signals quality (SNR and the presence of interference) at

the times when the captures are performed. The estimated position that provides the best DOP and quality of measurements trade-off has a confidence ellipse composed of 4.5 km semi-major axis and 0.26 km semi-minor axis. Estimated positions of the beacon using the geolocation system. 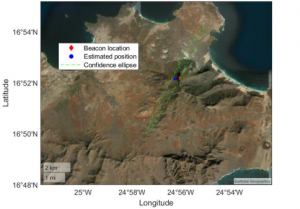 Confidence ellipse of the position estimate.

The spacecraft clusters are placed to achieve a diamond-shape formation (Figure 7). The diamond geometry is used to minimize the Dilution of Precision and is optimized to maximize the accuracy of passive geolcation techniques including TDOA and FDOA. The cluster occupies two orbital planes with the

same inclination but different Right Ascension of the Ascending Node of approximately 1˚. Inside each orbital plane, the spacecraft are unphased of about 1˚ in True Anomaly. 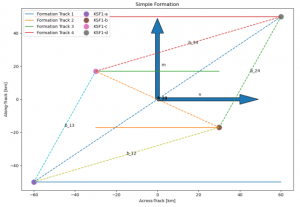 The optimal diamond-shaped formation is achieved at low latitudes (lower than 60° for clusters in polar orbits. As the spacecraft are moving towards the maximum orbital Latitude, the spacecraft tend to align 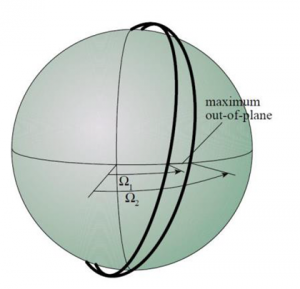