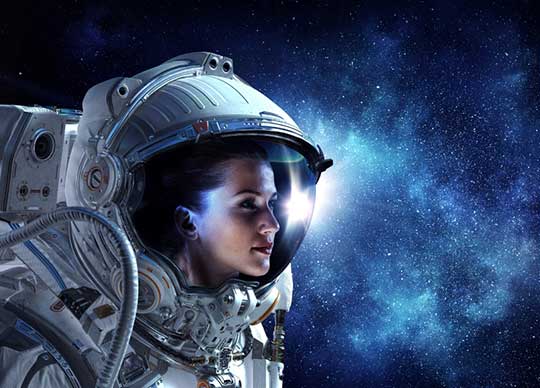 As of March 2021, 65 women have flown in space, including cosmonauts, astronauts, payload specialists, and space station participants. The first woman in space was Russian cosmonaut Valentina Tereshkova, who flew on Vostok 6 on June 16, 1963.

Women have participated in scientific research on the space station since 2001 and have become an integral part of advances in the program.

And now an Aussie from a quiet town near Newcastle, New South Wales, is flying the female flag for Australian women in space. 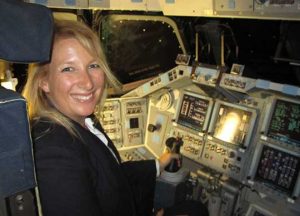 The Hamilton-based scientist is expected to fly her first suborbital mission in 2023 as a payload specialist on a commercial mission. And she couldn’t be more excited.

“I’ll be one of few certified crew members who can handle specialised scientific equipment aboard a suborbital spacecraft. Once we’re up there, my team and I expect to conduct research on Earth’s atmosphere. It’s an opportunity I consider out of this world. But it has taken a lot of effort for this dream to be realised” an eager Kim said.

THE BRAINS BEHIND THE WOMAN

Kim is an International Lawyer & Space Research professional with a background in metals, mining, and mineral processing in addition to expertise in Space Research, Technology & Law.

Additionally, Kim is the Space Technology Discipline & Aerospace Legal Lead for Swinburne University Centre for Astrophysics and Supercomputing, and an Adjunct Faculty member of the International Space University. Her thought leadership in academic research related to Space Governance, Law and Space Applications led her to being selected by the World Economic Forum, ESA, and MIT to contribute to creating the model for a new Space Sustainability Rating system designed to encourage sustainable behaviour in space and reduce new orbital debris creation.

THE PASSION BEHIND IT ALL 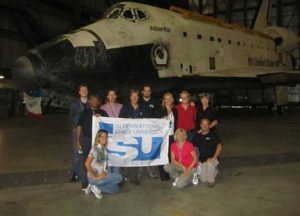 Kim Gina Ellis Hayes (top, third from right) with others from the International Space University, in front of the Shuttle Atlantis at NASA’s Kennedy Space Centre.

Passionate about STEM education and outreach for children and teenagers, Kim is a long-term volunteer for the CSIRO STEM professionals in schools’ program.

Kim is in training to fly missions for NASA 501(c) (3) astronautics research and education program which studies our upper-atmosphere and its role in our changing global climate.

As a female STEM and legal professional, her previous jobs included working as a research scientist in mining and metals for BHP-Billiton, Rio Tinto and the Australian Nuclear Science and Technology Organisation (ANSTO).

But she says she has always loved space.

“After combining my science degree with two law degrees, I won a scholarship for the International Space University. I eventually received an Australian Government Endeavour Executive Award for a project at the NASA Kennedy Space Centre. With this, I pivoted towards a career in the space industry, and have never looked back.”

Kim was selected as a PoSSUM (Polar Suborbital Science in the Upper Mesosphere) Scientist-Astronaut candidate and global ambassador for 2021. PoSSUM is a non-profit US astronautics research and education program run by the International Institute for Astronautical Sciences (IIAS).

The program uses next-generation suborbital spacecraft to study the upper atmosphere and its potential role in global climate change.

And it is at PoSSUM that Kim really took off.

“A suborbital spaceflight is any flight that reaches an altitude higher than 80 kilometres but doesn’t escape Earth’s gravity to make it into orbit. Anything above 80 kilometres is deemed “space” under US legislation, although some nations, including Australia, don’t agree with this and the debate about where “space” begins — also called the Kármán line — remains ongoing”.

KIM’S PATH OUT OF THIS WORLD

To graduate as a PoSSUM scientist-astronaut candidate, there are several academic and flight training components that must be completed before Kim can head into space.

“During academic training, I covered topics such as spaceflight physiology (what happens to the body in space), spaceflight life support, atmospheric science and spaceflight research equipment.

And of course, there’s the factor of attire as well says Kim. “We will also need to know our way around the spacesuits, which will be similar to those used by NASA. The famous orange suits are a life-support system for astronauts. Astronauts in orbital and suborbital spaceflights must wear them during launch, flight and return in case they have to exit the spacecraft in an emergency, or in case the spacecraft depressurises”.

Kim is expected to complete her first research flight to space on the Virgin Galactic vehicle, but she says, “given the rate of spacecraft development, it could be another similar craft. On day four of training, I will climb into an aerobatic aircraft with a cruise speed of 317 kilometres per hour, in which I will practise using equipment and techniques to avoid blackouts during aerobatic flight”.

Kim knows it is not an easy path to travel, and that is what she enjoys the most, the thrill of the unexpected.

“The final test will be a series of parabolic flights simulating microgravity aboard a different aircraft.

In parabolic flights, an aircraft repeatedly climbs steeply, then enters a deep dive, to create weightlessness for up to 40 seconds. This is repeated 20 to 25 times during the flight to demonstrate weightlessness in space. Experiments are conducted during weightlessness.”

“The last day of training will involve using virtual and augmented reality to practise planning space missions. We’ll be able to work on any aspect of the training we feel is needed before our final evaluation.”

“If all goes to plan, I will graduate with Federal Aviation Administration (FAA) qualifications as a spaceflight crew member for any space vehicle in the US (orbital and suborbital). Both my training and the work I will do aboard my first suborbital flight as a payload specialist fall within the guidelines outlined in the FAA’s advisory”.

LIFT OFF FOR FEMALE AUSTRALIANS IN SPACE

If there are no further changes to the eligibility requirements or criteria, Kim could be nominated to receive Astronaut Wings once the mission is complete. But the humble future space traveller says the biggest part of her space mission is what it means for the future of Australian women in space.

“It’s an honour for me to be able to train for this mission and hopefully bring the space dream closer to Australia. And by teaching space technology and law, I look forward to playing my part in advancing the next generation’s access to space”.

To celebrate the achievements of our female space leaders, ASITII is hosting a ‘Women in Space’ special virtual event with a stellar line up on Wednesday 6th October, 12:00pm – 1:00pm AEST.

Hear from a panel of incredible women, all making a difference to the Australian Space industry in their own unique way.

This year’s theme for World Space Week is Celebrating Women In Space, so show your support, connect and learn something new at this exciting session.