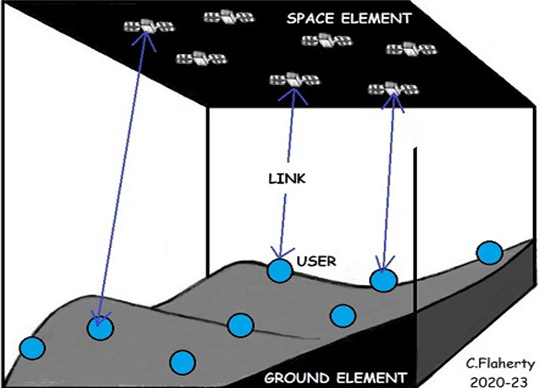 In classical Space Warfare Theory there are several constraints potentially impacting Space Domain coordination with Terrestrial Surface combat components in a battle, these are –

(1) Time: Increasingly battlefield manoeuvre time is simultaneous – having many elements operating in conjunction, and acting at high-speed. Space manoeuvre is sequential, and it may take several time periods to position a satellite in correct orbit to provide services. In many cases satellites need to position ‘Left of Launch’, in anticipation of military action on the Earth’s surface, and this could be weeks or months in advance.

(2) Planetary Rotation: Unless the satellite relied on is in Geostationary Orbit, appearing ‘stationary’ over a fixed position, most satellites, depending on their particular orbit, rotate more times than the Earth’s rotation period.

(3) Satellite Orbit: A satellite’s orbit in relation to a particular position on the Earth’s surface can pass-overhead, potentially reducing its accessibility to a User to a short-time duration.

This short research overview looks at a radical set of circumstances arising from expediency in 2022 where Ukrainian forces were able to rely on mass use of small portable dishes, and a mass constellation of satellites to secure battlefield communications services, provided by a Third-Party Provider. 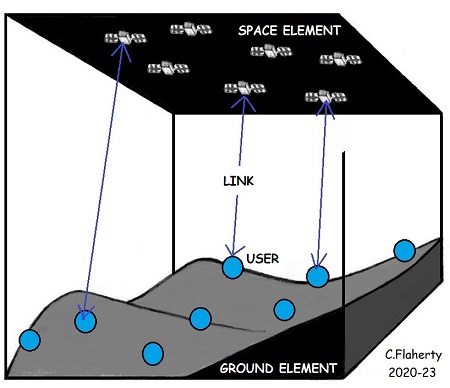 It is theorised that a Global Covering Satellite Layer (consisting of thousands of satellites), and massed number of mobile dishes potentially alter the classical Space Warfare constraints.

FIGURE 1: Illustrates a potential for the Earth’s Satellite Layer to operate as a common logistical and support base, that one or more combatants can rely on for a range of critical services: communications, GPS, surveillance, reconnaissance, and potentially even power. A corresponding field of mobile Terrestrial Surface Users, can also be developed.

Current Space Warfare Manoeuvre concepts identify three Elements that manoeuvre in relation to each other: (1) Space Element; (2) Link Element; and, (3) Ground Element. This is expressed as follows:

As a result of experiences during the 1991 Persian Gulf War (the First Space War), GPS devices were mounted in M1 Abrams tanks and Bradley Fighting Vehicles to get exact locations. This gave rise to the forth additional Space Warfare Manoeuvre Element – the User. The notion that multiple Users, usually individual vehicles could have an independent Link with a satellite, has altered over time. In the current Russo-Ukrainian war has come to mean a vehicle, or even a group of foot soldiers carrying a small portable dish that can make a satellite Link enabling communications.

Currently, the dominant Space Warfare Manoeuvre triad: Space, Link and Ground Elements, can be extended to a quad-relationship consisting of: Space, Link, Ground and User Elements, expressed as follows:

A modified manoeuvre triad can also be identified: Space, Link and User Elements, such as in the case of Ukraine currently, as much of its ground infrastructure has been destroyed by the 2022 Russian invasion, or was yet to be developed, prior to that invasion. This variation is expressed as follows:

FIGURE 1 shows a corresponding surfaces model with massed Satellite Layer (Space Element), and Terrestrial Surface (Ground Element) covered with Users, representing a large scale number of mobile dishes. It can be hypothesised that classical Space Warfare Time, Planetary Rotation, and Satellite Orbit constraints potentially go away, due to continuous Linking, where a Link is transferred from one satellite to the next (as these pass overhead). The dish – a self-pointing antenna when powered up quickly scans the sky and locks onto the nearest overhead satellite, it then seamlessly maintains that connection as each new one, part of a huge network of interlinked satellites, comes into view and the previous one fades beyond the horizon. The technology implication, is that potentially the current gap between Terrestrial Surface simultaneous and sequential time and manoeuvre, required by satellites in orbit is closed.

One of the main structural shifts to occur in contemporary warfare, has been landscape urbanisation and the geographical spread of infrastructure that supports modern society. Unlike the 1991 Persian Gulf War where a Western army had to go into the desert, and provide for all its needs, conflict since then has increasingly gravitated to vast urban sprawl, and one or more combatants operate over a common logistical and support base, they can rely on for a range of critical services. The next period of military transformation will see: (1) Earth’s Satellite Layer contain much of the world’s critical infrastructure; and, (2) This circumplanetary system will be under private control.

Two factors have the potential to fundamentally shift the nature of Space Warfare:

(1) As a result of Complexity Inversion the Earth’s Satellite Layer is effectively turned into a Commonwealth entity in Space – that is, all share, use it, and seek benefit from it.

(2) Emergence of private control as the dominant model for Space Infrastructure organization.

Space Fairing Countries are beginning to implement ‘Space Junk Removal Programs’ and this will likely see old national government satellites removed from orbit with the rest of the junk currently there. Correspondingly, private corporations are launching massive numbers of new constellations and individual satellites. This process will reconstitute the Earth’s Satellite Layer, but also turn National Defence and Security satellites – the Space Force Fleets into minority forces. Comparatively, the world’s merchant fleet is far greater than the current number of warships, and whereas up to now governments have monopolised Space and satellites, Space privatisation will see an end to this. It is possible, operating in the Earth’s Commonwealth Satellite Layer that destructive attacks against a satellite, risking orbital debris, which could damage, or destroy other satellites an attacker may want to use themselves, will see an attack methodology emerge designed to increase own force’s access, while denying service and access to an opponent. As well, we may see a greater emphasis on rendezvous-styled attacks, where war satellites are used to capture, shut-down, or co-opt target satellites. As we have seen in the current Russo-Ukrainian war, Third-Party Provider’s satellites, allies and other national governments have been used to augment, extend, and develop Ukrainian, or Russian Space Power. It is suggested that this mixed model may become increasingly common in future Orbital Space Wars.