Viewed from a terrestrial perspective, the Earth’s orbiting space region is occupied primarily by civil scientific research activities, civil and military surveillance, reconnaissance, and communications satellite operations, designed to cover portions of the Earth’s surface. Signatory states operate under the mantel of the 1967 Outer Space Treaty banning deployment of nuclear weapons in space, and the territorialisation of space segments, other planets, and orbiting natural satellites in the Solar System. This paper explores the notion of Spherical Strategy in space. Spherical Strategy represents the next continuation moving strategic and tactical thinking away from a terrestrial focus. 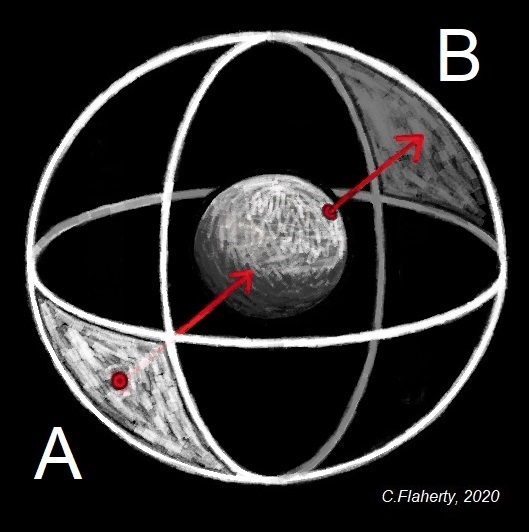 “FIGURE 1: Illustrates a planet, with its Orbiting Sphere. A: Represents the Spherical Strategy view, with an attack on the surface, representing Vertical Strategic and Tactical Dominance. B: Represents an Asymmetric terrestrial-based attack on an orbiting object.”

The major conceptual shift to occur affects a transition from classical Asymmetric to Vertical Strategic and Tactical Dominance by one combatant over another. Traditional strategy and tactics conducted on a planetary surface are radically inverted, to a new locus on the Orbiting Sphere surrounding Earth, its Moon, or Mars. The Orbiting Sphere becomes a strategic and tactical platform in its own right, marking a conceptual shift to Vertical Strategic and Tactical Dominance of the terrestrial surface.

Potential for combat in space, on other worlds: the Earth’s Moon, and Mars by human and robotic combatants, launching attacks into space, and spaceborne attacks can be viewed from a traditional terrestrial perspective, or from a Spherical Strategy view. Spherical Strategy has its antecedence, in the development of air technologies, and concepts, such as:

(i) The use of several spinning gun turrets mounted around the Boeing B-29 Superfortress fuselage, for all-around defence in full-volume three dimensional space.

(ii) John Boyd’s OODA loop cycle: Observe-Orient-Decide-Act, originally as it was intended as a thinking process in the full-volume three dimensional space.

Spherical Strategy progresses the development in the 20th Century of the operational field geometry of Jominian Strategies. The beginning point in this transition, is a shift in viewing the Jominian operational field two dimensionally (its original 19th Century conception), to its full-volume three dimensions, incorporating the Earth’s surface and its corresponding aerospace block above it. Spherical Strategy can be viewed as a next stage in Jominian Strategies, essentially decoupling this paradigm from being tied to the terrestrial surface.

The space above the Earth’s surface (unlike national airspace), cannot be partitioned. From a Spherical Strategy perspective, the Orbiting Sphere operates as a notional shared platform. In Spherical Strategy, the Orbiting Sphere is the new platform for weapons, these are multi-directed, and are interposed between thousands of man-made military and civil space-based assets: communication, reconnaissance, and intelligence gathering capabilities. The largest of these assets are the International Space Station, and the GPS system, alongside mapping, surveillance, and scientific equipment.

The multiplicity of man-made objects in space represent multiple international partnerships, private corporations, and states; some in peaceful relations, others belligerent. The complexity around launching an attack in space can be illustrated by the 2019 Indian Shakti: Power Mission, involving a ground-launched anti-satellite missile test hitting a target satellite in Low Earth Orbit. International concerns were raised over the creation of space debris from the smashed satellite, its duration in orbit, and how long before it burned-up on re-entry. A key limitation on the use of the technology was its potential effect on neutral third-parties, whose satellite systems could be damaged by the debris. “FIGURE 2: The transition in Spherical Strategy between an Asymmetric Strategic or Tactical response (AS); and, towards Vertical Strategic, and Tactical Dominance (VS).”

(ii) Asymmetric Strategy: One combatant uses strategies, tactics or weapons technology that has no equivalent to what the other side is using, and this derives an advantage.

The next progression is Vertical Strategic and Tactical Dominance.

Vertical Strategic, and Tactical Dominance (see TABLE 1; and FIGURES 2, and 3), operates from the Orbiting Sphere inverting the relationship between combatants; meaning – a combatant operates at a technological level that is so far advanced, that its subsidiary strategies, tactics, and weapons technologies, have no equivalence to anything an opponent may have, and cannot be countered in any way, giving the combatant total strategic and tactical superiority.

TABLE 1: THE EVOLUTION FROM CONTINENTAL, ASYMMETRIC TO VERTICAL STRATEGIES AND TACTICS “FIGURE 3: The transition from Continental, Asymmetric to Vertical Strategies and Tactics. Viewed from the perspective of Spherical Strategy, the ability of a combatant to operate from the Orbiting Sphere achieving Vertical Strategic and Tactical advantage, gives complete ubiquity over a technologically inferior terrestrial based opponent.”

Instances where Vertical Strategies and Tactics have evolved, are the first use of the Atomic Bomb, or the earlier WW2 concept of Stratosphere Bombing, to attack targets with ubiquity beyond the capability of a terrestrial opponent to effect an air-defence and stop the bombers.

Conceptually, the current International Space Station is largely designed as a parallel floor, in relation to the surface of the Earth, and is broadly aligned along a spatial axis, with distinct forward, aft, port, and starboard sides. Viewed from a Spherical Strategy perspective the engineering-architectural aspects of the International Space Station would likely take-on an actual spherical structure, with a multifaceted surface – containing living and working compartments looking outwards. Rather than an additional terrestrial platform oriented in the direction of a spatial point, the conceptual shift is constructing a panoptic structure: where everything is visible in one view. A Spherical Strategy platform is a simple continuation of the original 1883 conception by Konstantin Tsiolkovsky Spherical Spaceship.

The Tsiolkovsky Spherical Spaceship was crewed by four humans operating the craft in orbiting weightlessness. Each occupant manned a facet controlling a different direction. Spherical Strategy, like John Boyd’s OODA loop cycle: Observe-Orient-Decide-Act are essentially a continuation of the Tsiolkovsky design. Boyd’s OODA loop is usually displayed as a circular decision cycle; however, its truer conception was a human decision occurring within a spherical space, with multiple vectors, and decision points occurring in staggered succession, or several simultaneously. The spherical (three dimension) OODA loop is based on an air combat pilot’s perception of the tactical space around their cockpit as they manoeuvre and engage within a region of air-space.

The implication of a major state power achieving Spherical Strategy in the near future for a country like Australia – it faces a major risk becoming a frontline state in a potential conflict between the major Northern hemisphere powers: the United States, United Kingdom, Russia, China, and European Union. The need to maintain satellite, or future Moon, or Mars missions contact is dependent, as it has been historically, on Australia’s position in the Southern hemisphere, and it being geographically midway between the US and Europe.

Many, if not most states now need access to space-based assets to critically operate. Near-future thinking about space as a contested warfighting domain, is largely focused on control of space by developing counter-space capabilities: anti-satellite weapons, or cyber-attacking technology to damage, disable, deny, and tamper with access to critical space support. Potentially, the pre-curser to implementing a Spherical Strategy could see substantial attacks – possibly nuclear weapons strikes, on historically significant, and crucial space-port launch facilities. Concurrently, major attacks would target world-wide distributed ground-links, in many different countries.

A Spherical Strategy – Vertical Strategic and Tactical Dominance, is likely achievable in the near-future using current technology, attacking a rival’s critical satellites or its satellite network isolating, blocking access to their technology to enclose and control them. However, this will be complex as the Orbiting Sphere operates as a shared platform, and Spherical Strategy – Vertical Strategic or Tactical actions will be distributed in orbit around a planet, and interposed through a field of potentially thousands of man-made objects, including hazards from orbiting ‘space junk’. A wide number of other players will also be in contention: rival and allied states, private corporations and organisations, non-state actors, even extremist, radical and terrorist organisations – maintaining their own, and likely sharing space capabilities.

Chris Flaherty authored the Terrorism Research Center’s report – Dangerous Minds (2012). He was the co-primary author, along with Robert J. Bunker of the book – Body Cavity Bombers: The New Martyrs (iUniverse, 2013). Two essays of his, from 2003 and 2010 were reprinted in the Terrorism Research Center’s book – Fifth Dimensional Operations (iUniverse, 2014). He recently contributed a book chapter – The Role of CCTV in Terrorist TTPs, edited by Dave Dilegge, Robert J. Bunker, John P. Sullivan, and Alma Keshavarz, the book – Blood and Concrete: 21st Century Conflict in Urban Centers and Megacities, a Small Wars Journal anthology, published on behalf of the Small Wars Foundation with Xlibris (2019).