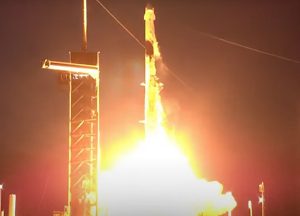 Image: A SpaceX Falcon 9 rocket lifts off from NASA’s Kennedy Space Center in Florida on July 14, 2022, with a Cargo Dragon spacecraft aboard for SpaceX’s 25th resupply mission to the International Space Station. Credits: NASA TV.

A SpaceX Dragon resupply spacecraft carrying more than 5,800 pounds of science experiments, crew supplies, and other cargo is on its way to the International Space Station after launching at 8:44 p.m. EDT Thursday from NASA’s Kennedy Space Center in Florida.

The spacecraft launched on a Falcon 9 rocket from Launch Pad 39A at Kennedy for the company’s 25th commercial resupply services mission for NASA. It is scheduled to autonomously dock at the space station about 11:20 a.m. Saturday, July 16, and remain there for about a month. Coverage of arrival will begin at 10 a.m. on NASA Television, the agency’s website, and the NASA app.

Among the science experiments Dragon is delivering to the space station are:

Mapping Earth’s Dust
The Earth Surface Mineral Dust Source Investigation (EMIT), developed by NASA’s Jet Propulsion Laboratory in Southern California, employs NASA imaging spectroscopy technology to measure the mineral composition of dust in Earth’s arid regions. Mineral dust blown into the air can travel significant distances and affect Earth’s climate, weather, vegetation, and more. For example, dust containing dark minerals that absorb sunlight can warm an area, while light-colored mineral dust can cool it. Blowing dust also affects air quality, surface conditions such as rate of snow melt, and phytoplankton health in the ocean. The investigation collects images for one year to generate maps of the mineral composition in the regions on Earth that produce dust. Such mapping could advance our understanding of the effects of mineral dust on human populations now and in the future.

Speedier Immune System Aging
Aging is associated with changes in the immune response known as immunosenescence. Microgravity causes changes in human immune cells that resemble this condition, but happen faster than the actual process of aging on Earth. The Immunosenescence investigation, sponsored the by International Space Station U.S. National Laboratory, uses tissue chips to study how microgravity affects immune function during flight and whether immune cells recover post-flight. Tissue chips are small devices that contain human cells in a 3D structure, allowing scientists to test how those cells respond to stresses, drugs, and genetic changes.

Soil in Space
On Earth, complex communities of microorganisms carry out key functions in soil, including cycling of carbon and other nutrients and supporting plant growth. Dynamics of Microbiomes in Space sponsored by NASA’s Division of Biological and Physical Sciences, examines how microgravity affects metabolic interactions in communities of soil microbes. This research focuses on microbe communities that decompose chitin, a natural carbon polymer on Earth.

High School Student Weather Study
BeaverCube is an education mission that will teach high school students aerospace science by having them design a CubeSat. BeaverCube will host one visible and two infrared imagers to measure cloud properties, ocean surface temperatures, and ocean color to study Earth’s climate and weather systems. It also will demonstrate an application for the use of shape memory alloy technology via an in-orbit calibration technique.

Genes, No Cells
Cell-free technology is a platform for producing protein without specialized equipment of living cells that need to be cultured. Genes in Space-9, sponsored by the National Lab, demonstrates cell-free production of protein in microgravity and evaluates two cell-free biosensors that can detect specific target molecules. This technology could provide a simple, portable, and low-cost tool for medical diagnostics, on-demand production of medicine and vaccines, and environmental monitoring on future space missions.

Better Concrete
Biopolymer Research for In-Situ Capabilities looks at how microgravity affects the process of creating a concrete alternative made with an organic material and on-site materials, such as lunar or Martian dust, known as a biopolymer soil composite. Using resources available where construction takes place makes it possible to increase the amount of shielding.

These are just a few of the hundreds of investigations currently being conducted aboard the orbiting laboratory in the areas of biology and biotechnology, physical sciences, and Earth and space science. Advances in these areas will help keep astronauts healthy during long-duration space travel and demonstrate technologies for future human and robotic exploration beyond low-Earth orbit to the Moon and Mars through NASA’s Artemis program.