The Space Tourism-Adventure Industry is seen as largely dependent on a limited pool of exceptionally wealthy customers (King, 2020). Since its inception around 1998, the Industry, has been limited due to high fixed costs to enter the Space market, unless these are offset by government or a wealthy third party (Carr, 2005). 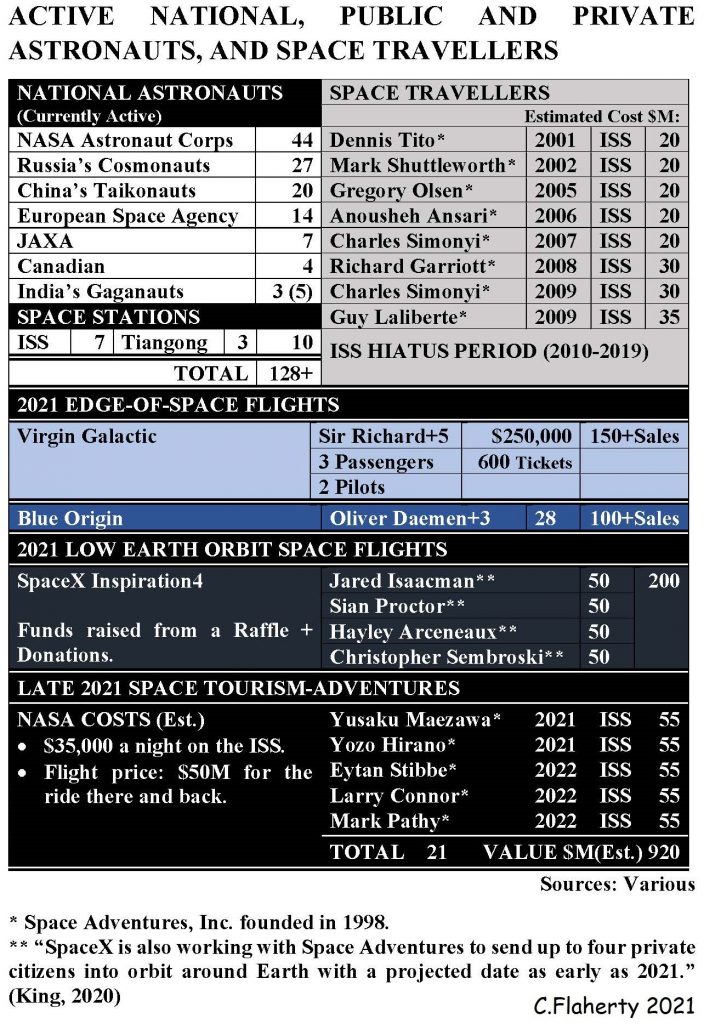 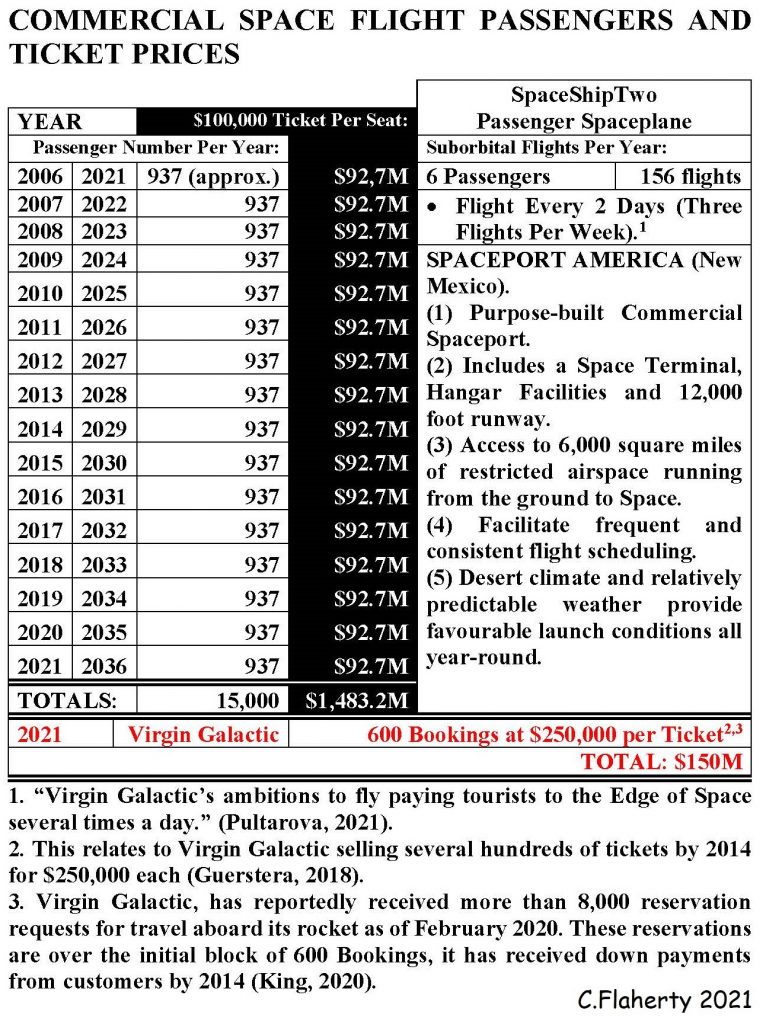 This table spreads a total of 41,000 passengers (Pax.), over nine years, flying on a 6-seat Spaceplane, with an estimated ticket price of $192,682 per seat. Some 4,555 passengers would fly into Space, per year on 759 flights, at a rate of 2-3 flights per day, all-year round.
The limiting factors on maintaining this level of commercial activity is the number of potential craft available, and the number of companies operating craft, or facilitating flights – booking agents.

It should be noted that an earlier forecast, had a compressed rate over a 7 to 8-year period, with a higher rate of passengers, and ticket sales:

Virgin Galactic (Space Tourism Company), was founded in 2004 after SpaceShipOne, built by the company Scaled Composites and financed by the late billionaire Paul Allen, won the $10 million Ansari X Prize for Reusable Commercial Spaceflight (Gohd, 2021). The origin of the Ansari X Prize related back:

“In May of 1996, in the spirit of private growth, the Ansari X Prize Foundation announced it would award ten million dollars to the first team that privately financed, built, and launched a Spaceship able to carry three people to 100 kilometres, return safely to Earth, and successfully repeat the launch within two weeks.” (Carr, 2005)

Russia halted Orbital Space Tourism, that had started in 1998-2001, in 2010 because of an increase in the International Space Station crew size. The decision also related to the end of the Space Shuttle Program:

“Tourist visits to Space came to a halt when NASA’s Shuttle Program ended in 2011. Thereafter, American Astronauts bound for the International Space Station … were allocated seats aboard Soyuz rockets pursuant to a U.S. diplomatic agreement with Russia, leaving no extra seats to accommodate tourist passengers.” (King, 2020)

“In June 2019, NASA changed a long-standing policy when it announced plans to allow private citizens to fly to the ISS for short visits. It did not, however, offer to provide transportation.” (King, 2020)

Inaugural Edge-of-Space Flights by Virgin Galactic, and Blue Origin had ‘Astronaut Wings’ award ceremonies – that used private companies’ badge designs. The Federal Aviation Administration (FAA), announced a major change to its Commercial Space Astronaut Wings Program, which launched in 2004. A Commercial Astronaut is a person who has commanded, piloted, or served as an active crew member of a privately funded Spacecraft. The new change: those who fly on Commercial Space Missions must also have demonstrated activities during flight that were essential to public safety, or contributed to Human Space flight safety (FAA, 2021).

The commonly understood requirement for Suborbital Space Tourism is to take a passenger to an altitude above the Earth’s surface, at some 62.1 miles: 100 kilometres, providing them with an adventure in Space, experiencing weightlessness, view the curve of the Earth, and blackness of Outer Space. This largely attempts to replicate the 5 May, 1961 mission by Alan Shepard in the Freedom 7 Spacecraft (Capsule). It blasted-off from Cape Canaveral, Florida, on a Mercury-Redstone 3 Rocket, carrying Shepard to an altitude of 116 miles: 187 kilometres for a 15 minute Suborbital flight. The Capsule parachuted back for an ocean landing. 2021 Blue Origin New Shepard Spacecraft (Capsule) blasted-off, on a Reusable First-Stage Booster Rocket. Carrying to an altitude of 62.1 miles: 100 kilometres for a 3 minute Edge of Space flight. The Capsule parachuted back for a land landing.

2021 Virgin Galactic Spaceplane, released from a aircraft mothership flew above 49.6 miles: 80 kilometres for a 8 minute Edge of Space flight, and then glided-back to an airstrip.

Space Adventures operates a modified Boeing aircraft that takes off from a runway, reaches a certain altitude, and performs a manoeuvre in the shape of an arc that allows passengers aboard to feel intense pressure almost twice that of normal gravity on the way up followed quickly by less than a minute of weightlessness near the top of the arc. The feeling is said to be similar to what an Astronaut feels in the microgravity environment of the International Space Station. The aircraft performs this manoeuvre several times within airspace designated by the Federal Aviation Administration (FAA). The experience costs about $5,400 per passenger (King, 2020). 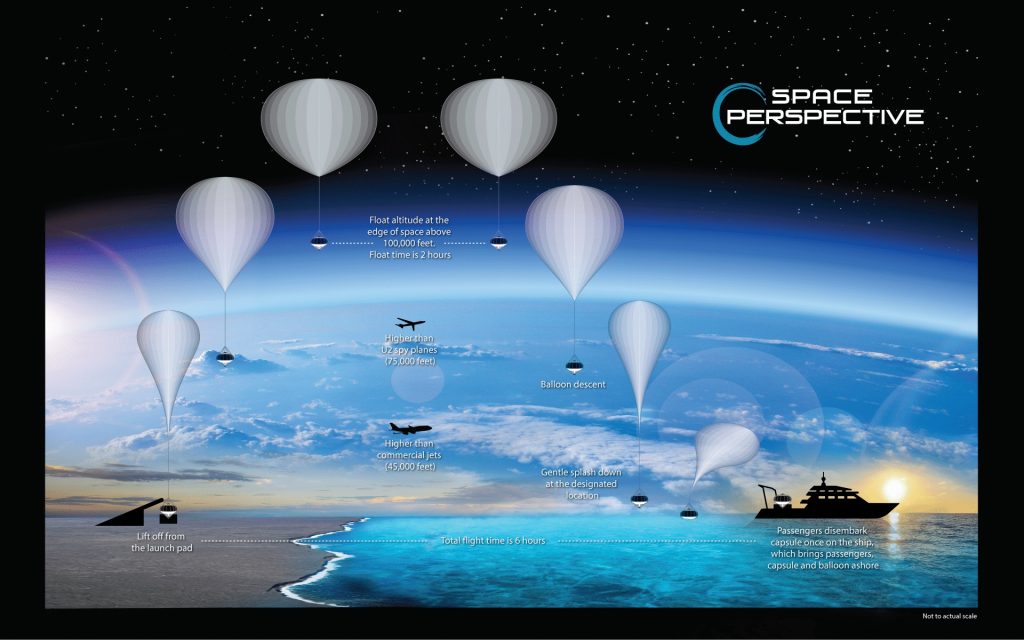 Space Perspective, a Florida-based private company was created in June 2020. The company has been accepting seat reservations for its Spaceship Neptune, a pressurized capsule, carried to an altitude of nearly 19 miles: 30.5 kilometres, using a high-altitude gas-filled football-field-sized balloon. Designed to carry eight passengers and one pilot. The price is $125,000 per seat. Initially operating from a base in Florida. Passengers can expect to view the curve of the Earth and blackness of Outer Space, far above the altitudes at which commercial airplanes normally fly (around 7.2 miles: 11.5 kilometres). The balloon descends after a several-hour journey by gradually releasing its gas, to land at sea for a recovery (King, 2020; Wall, 2021).

Space Diving-Jumping, are extreme high-altitudes skydives that require a specialised suit, or capsule and suit combination, and use a high-altitude balloon to make the ascent:

The Space Tourism-Adventures Industry is still in its beginnings, and so far not a great deal of regulations, or laws have been designed. In the case of,

“The U.S. government currently has no procedures for certifying the safety of launch vehicles or Space travel for tourists. An exhaustive certification process exists for Commercial Spacecraft transporting NASA Astronauts, but the same standards have not been formally required of Space vehicles for tourist use.” (King, 2020)

It is also unclear whether NASA will insist that Private Astronauts and Space Tourists visiting the International Space Station, in late 2021, will need to meet the same medical and training requirements as NASA Astronauts aboard the Station (King, 2020).

Researchers have attempted to assess the impact of Stratosphere pollution from rocket exhaust (Pultarova, 2021). Environmental concern is that increasing launch frequencies, and accumulating effects could cause harm by injecting pollutants into the Stratosphere. There is already a permanent layer of carbon in the atmosphere at the flight level of aircraft. Particles from rocket motors will likely create a secondary level in the Stratosphere.

It has been theorize, that rocket motors burning hydrocarbon fuels generate soot. Soot absorbs ultraviolet light, and this could possibly heat the Stratosphere, potentially changing its motion. Future harm may come in altering the polar jet stream, change winter storm patterns or affect average rainfall. Soot particles generated by hybrid rocket engines are extremely small and light-weight, and the particles could stay in the Stratosphere forever. Solid fuel rocket engines used for boosters burn metallic compounds emitting aluminium oxide particles together with hydrochloric acid, both of which have a damaging effect on the atmosphere. For instance, there was a measurable impact from the Space Shuttle’s solid fuel boosters on ozone depletion in the Stratosphere. Rockets generating ozone-damaging substances continue to launch currently.

The potential problem is rocket engine burns pollute the higher layers of the atmosphere in the Earth’s Stratosphere at an altitude of 6.2 miles: 10 kilometres, and the Mesosphere at an altitude of 31 miles: 50 kilometres. Emitting pollutants in a place where these are not normally emitted. So far, the impact of rocket launches on the atmosphere is negligible. The amount of fuel currently burned by the Space Industry is less than 1% of the fuel burned by Aviation. However, a Suborbital Space Tourism flight, lasting about an hour and a half, can generate as much pollution as a 10-hour Trans-Atlantic Flight.

Having looked at the overall structure of the current Space Tourism-Adventures Industry, how does this translate into Australia? There are several possibilities: