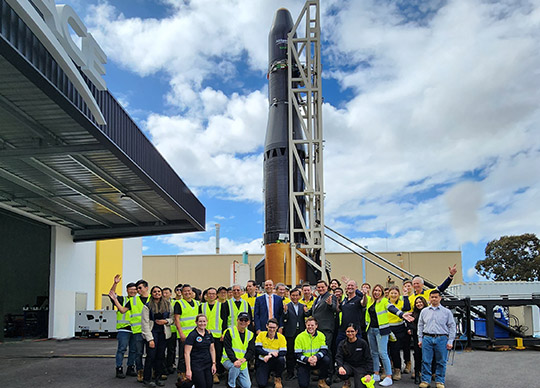 Four South Australian companies are putting the final touches on the VS03 mission that will launch a rocket and state-of-the-art payloads to space from South Australia before the end of the year.

The ‘Kestrel I’ launch vehicle is a 10 metre, two stage, sub-orbital rocket. The rocket will launch from the Whalers Way Orbital Launch Complex and reach an altitude of over 200 kilometres above Earth. The trajectory of the launch will be over the Southern Ocean with the total time of flight approximately 10 minutes.

The Southern Launch payload will use existing satellite phone technology to track the rocket as it travels through space removing the need for traditional ground-based infrastructure. This mission will provide vital data to prove the capability of this ground-breaking technology and serves as a proof of concept for future product development.

During the time in flight, Southern Launch, Asension and Inovor Technologies will monitor their payload and test communication protocols. For Southern Launch and ATSpace, it will be another opportunity to gain further flight heritage for the ‘Kestrel I’ launch vehicle in preparation for future orbital launch attempts.

Southern Launch CEO Lloyd Damp says, ‘Southern Launch is proud to be launching this rocket on behalf of our customer ATSpace and providing access to space for Asension and Inovor Technologies to test their world-class technology. We are also excited to test our own payload capabilities in flight.’

‘The VS03 mission is incredibly exciting. It is a realisation of the incredible work and collaboration that is happening right here in South Australia and testament to our position as the space capital of Australia,’ Lloyd continues. The Chief Executive Officer of ATSpace, Dr Yen-Sen Chen, expressed the significance of the launch in demonstrating the technical performance of the Kestrel I system.

‘This suborbital launch will provide us with valuable data to validate our future Kestrel V orbital design. Launching to space is a challenging task and well-planned test launches help us achieve technical maturity.’

Inovor Technologies founder and Chief Executive Officer Dr Matthew Tetlow says, ‘This is a terrific opportunity to demonstrate to the Australian Government and Department of Defence the sovereign space capabilities on offer right here in South Australia. It’s a great example of what’s possible when four companies like ours collaborate.’

Ian Spencer, CEO of Asension highlights the importance of Australian space launch capabilities. Ian says, ‘Having access to space from Australian soil is a game changer for our R&D efforts. This launch will accelerate the development of our technology in way that has not previously been possible. This means that we can provide greater sovereign capability sooner.’

The rocket will be launched from Southern Launch’s Whalers Way Orbital Launch Complex near Port Lincoln on the Eyre Peninsula of South Australia.

Public viewing areas of the launch will be located at a safe distance from the launch facilities. Follow Southern Launch social media pages for the most up-to-date information