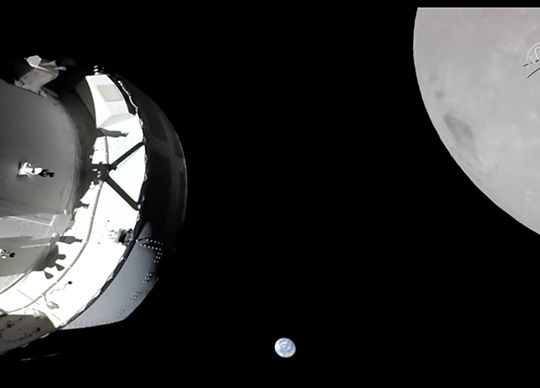 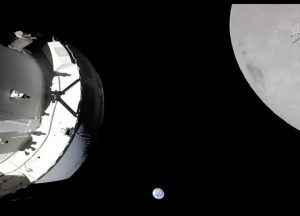 Image: On Nov. 21, 2022, a camera on Orion’s solar array wing captured this view of the spacecraft, the Earth and the Moon. Orion was making its outbound powered flyby of the Moon as part of the Artemis I mission, approaching within 80 miles of the lunar surface. Artemis I, the first flight test of NASA’s Orion capsule and Space Launch System rocket, launched Nov. 16, 2022, and is scheduled to splashdown Dec. 11. Credits: NASA TV.

NASA will host a news conference at 5 p.m. EST today, Monday, Nov. 21, from the agency’s Johnson Space Center in Houston to discuss Orion’s lunar flyby as part of the Artemis I mission. Participants also will provide an update on post-launch assessments of the Space Launch System rocket and exploration ground systems.

Orion successfully conducted an outbound powered flyby burn at 7:44 a.m. to accelerate the spacecraft, harness the force from the Moon’s gravity, and direct Orion toward a distant retrograde orbit beyond the Moon. During the maneuver, Orion made its closest lunar approach, flying about 81 miles above the lunar surface.

NASA will provide live coverage of the briefing on NASA Television, the agency’s website, and the NASA app.

Anyone wanting to submit a question on social media may do so using #AskNASA.

Following a successful launch atop NASA’s Space Launch System rocket at 1:47 a.m. EST Wednesday, Nov. 16, Orion will travel approximately 40,000 miles beyond the Moon and back to Earth as the first Artemis mission. Artemis includes a series of increasingly complex missions that will enable human exploration at the Moon where the agency will prepare for future missions with crew to Mars.

Learn more about Artemis at: https://www.nasa.gov/artemis-1