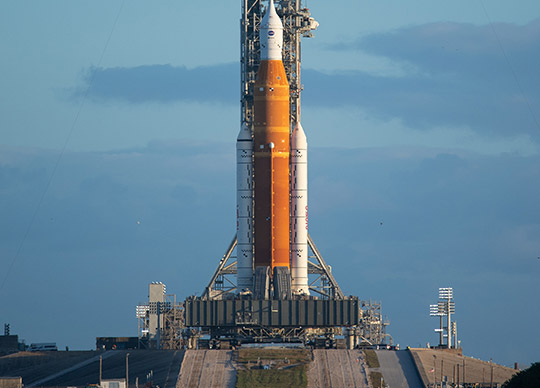 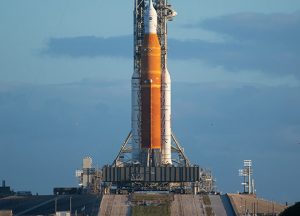 Image: NASA’s Space Launch System rocket with the Orion spacecraft for Artemis I arrived to Launch Pad 39B at Kennedy Space Center in Florida Nov. 4. Launch of the uncrewed Artemis I flight test is targeted for Nov. 14. Credits: NASA/Joel Kowsky.

Artemis I is the first integrated flight test of NASA’s Space Launch System (SLS) rocket, an uncrewed Orion spacecraft, and the ground systems at the agency’s Kennedy Space Center in Florida that will pave the way for a crewed test flight and future human lunar exploration as part of Artemis.

The SLS rocket and Orion spacecraft arrived Friday, Nov. 4 at about 8:30 a.m. Live coverage of briefings and events will air on NASA Television, the NASA app, and the agency’s website at: https://www.nasa.gov/live

Engineers previously rolled the rocket back to the Vehicle Assembly Building (VAB) Sept. 26 ahead of Hurricane Ian and after waving off two previous launch attempts Aug. 29 due to a faulty temperature sensor, and Sept. 4 due to a liquid hydrogen leak at an interface between the rocket and mobile launcher. Prior to rolling back to the VAB, teams successfully repaired the leak and demonstrated updated tanking procedures. While in the VAB, teams performed standard maintenance to repair minor damage to the foam and cork on the thermal protection system and recharge or replace batteries throughout the system.

Full launch coverage is as follows. All times are Eastern, all events will air live on NASA TV, and the information is subject to change. Follow NASA’s Artemis blog for updates.

12 p.m.: NASA will hold a prelaunch media briefing on the status of the countdown with the following participants:

2:30 p.m.: Coverage of tanking operations to load propellant into the SLS rocket begins, including views of the rocket and Launch Control Center and audio from a commentator.

9:30 p.m.: Coverage of launch begins in English. Coverage will continue through translunar injection and spacecraft separation, setting Orion on its path to the Moon.

11 p.m.: Coverage of launch begins in Spanish on NASA’s Spanish-language YouTube account and will continue approximately 15 minutes after liftoff. Mission coverage updates will be posted on the NASA en español social media channels.

7:30 a.m.: Coverage of Orion’s first outbound trajectory burn on the way to the Moon. Coverage start time is subject to change, based on the exact liftoff time.

8:50 a.m.: Coverage of first Earth views from Orion during outbound coast to the Moon.

NASA Television coverage of additional events throughout the mission is available online.

Coverage will include live streaming and blog updates. On-demand video recordings and photos of the launch will be available shortly after liftoff. Follow countdown coverage on NASA’s Artemis blog at: https://blogs.nasa.gov/artemis

Live NASA TV coverage leading to launch will begin with commentary of tanking operations at 2:30 p.m. Sunday, Nov. 13, followed by launch coverage beginning at 9:30 p.m. Launch coverage will stream on the NASA website, as well as Facebook, Twitch, NASA YouTube, and in 4k on NASA’s UHD channel. For NASA TV downlink information, schedules, and links to streaming video, visit: https://www.nasa.gov/nasatv

On launch day, a “tech feed” will be carried on the NASA TV media channel featuring views of the rocket and audio from a commentator in the Launch Control Center throughout and a single channel of mission audio beginning 15 minutes before launch.

NASA’s broadcast of the launch in Spanish will include interviews with Hispanic members of the mission and live commentary.

The show, which will begin at 11 p.m. Sunday, Nov. 13, will be available on NASA en español’s YouTube account, and will continue approximately 15 minutes after liftoff. Mission coverage will then follow on the NASA en español social media channels.

Members of the public can register to attend the launch virtually. NASA’s virtual guest program for the mission includes curated launch resources, notifications about related opportunities or changes, and a stamp for the NASA virtual guest passport following a successful launch.

Watch and Engage on Social Media

The public can track the Artemis I mission as it happens using to Artemis Real-time Orbit Website, which will provide information about where Orion is in relation to the Earth and the Moon. Individuals also can also download a virtual boarding pass to commemorate the historic flight.