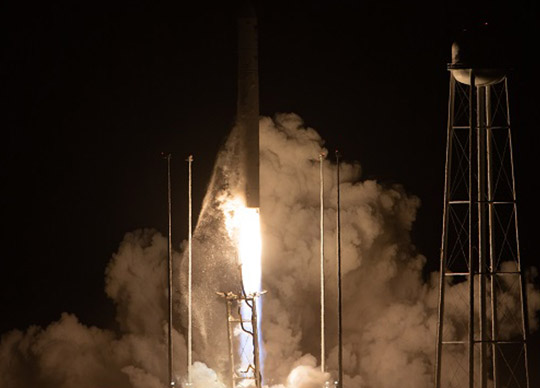 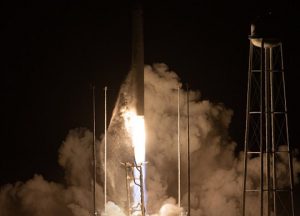 Northrop Grumman Cygnus resupply spacecraft is on its way to the International Space Station with more than 8,200 pounds of science investigations and cargo after launching at 5:32 a.m. EST Monday from NASA’s Wallops Flight Facility in Virginia.

NASA Television, the NASA app, and the agency’s website will provide live coverage of the spacecraft’s approach beginning at 3:30 a.m. Wednesday, Nov. 9. Cygnus is scheduled to arrive at the space station around 5:05 a.m. Installation coverage will resume at 7:15 a.m. Watch all events at: https://www.nasa.gov/live

NASA astronaut Nicole Mann will use the space station’s robotic Canadarm2 to capture Cygnus upon its arrival, while NASA astronaut Josh Cassada monitors telemetry during rendezvous, capture, and installation on the Earth-facing port of the Unity module.

Northrop Grumman’s 18th cargo flight to the space station is the seventh under its Commercial Resupply Services 2 contract with NASA. The Cygnus spacecraft, which Northrop Grumman dubbed ‘S.S. Sally Ride’ after late NASA astronaut, physicist, and first American woman to fly in space, Sally Ride, launched on an Antares 230+ rocket from the Virginia Mid-Atlantic Regional Spaceport’s Pad 0A at Wallops.

The resupply mission will support dozens of the more than 250 investigations that will be conducted during Expedition 68. Included in the scientific investigations are:

The BioFabrication Facility successfully printed a partial human knee meniscus and a large volume of human heart cells during its first trip to space in 2019. Now the facility is returning to the microgravity laboratory with new capabilities to further human tissue printing research. The 3D bioprinter tests whether microgravity enables the printing of tissue samples of higher quality than those printed on the ground. These technologies could be used to help alleviate organ shortages for patients in need of transplants.

Assessing how plants adapt in space

Plants exposed to spaceflight undergo changes that involve the addition of extra information to their DNA, which regulates how genes turn on or off but does not change the sequence of the DNA itself. This process is known as epigenetic change. Plant Habitat-03 assesses whether such adaptations in one generation of plants grown in space can transfer to the next generation. The research could inform the development of plants better suited for use on future missions to provide food and other services. Results also could help develop or adapt crops and other economically important plants to grow in marginal and reclaimed habitats on Earth.

Catastrophic mudflows after wildfires can carry heavy boulders and debris downhill, which is dangerous to humans and causes significant damage to infrastructure and watersheds. Post-Wildfire Mudflow Micro-Structure evaluates the composition of these mudflows, which include sand, water, and trapped air. Results could improve understanding of the fundamental mechanisms that govern post-wildfire debris movement, including how mudflows trap air bubbles and carry heavy boulders. This investigation also could help develop and validate models to predict the spread and velocity of debris flows and their effect on houses, other infrastructure, and natural obstacles.

Sponsored by NASA and the Italian Space Agency (ASI) and coordinated by ASI, the Modulation of Granulosa and Theca Cells Activity in Microgravity: Consequences for Human Health and Reproduction (OVOSPACE) investigation examines the effect of microgravity on bovine cell cultures, as living for prolonged times in the reduced microgravity environment could impair fertility. OVOSPACE results could improve fertility treatments on Earth and help prepare for future human settlement in space.

The Joint Global Multi-Nation Birds Project-5 (BIRDS-5) is a constellation of three CubeSats to be deployed after arrival at the space station: PEARLAFRICASAT-1, the first satellite developed by Uganda; ZIMSAT-1, Zimbabwe’s first satellite; and TAKA from Japan. BIRDS-5 performs multispectral observations of Earth using a commercial off-the-shelf camera and demonstrates a high-energy electronic measuring instrument. The statistical data collected could help distinguish bare ground from forest and farmland and possibly indicate the quality of agricultural growth. A cross-border university project, BIRDS provides students from developing nations with hands-on satellite development opportunities, laying a foundation for similar space technology projects in their home countries that ultimately could lead to sustainable space programs there.

These are just a sample of the hundreds of investigations currently conducted aboard the orbiting laboratory in the areas of biology and biotechnology, physical sciences, and Earth and space science. Such research benefits people on Earth and lays the groundwork for future human exploration through the agency’s Artemis missions, which will send astronauts to the Moon to prepare for future expeditions to Mars.

Cygnus also will deliver a new mounting bracket that astronauts will attach to the starboard side of the station’s truss assembly during a spacewalk planned for Tuesday, Nov. 15. The mounting bracket will enable the installation of one of the next pair of new solar arrays later this year.

The spacecraft will remain at the space station until January before it disposes of several thousand pounds of trash through its destructive re-entry into Earth’s atmosphere.