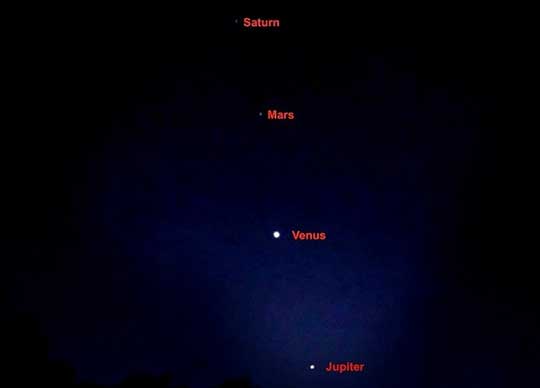 Early risers are in for a celestial treat this weekend when four planets in our solar system align in the sky, culminating in a “romantic” display between Venus and Jupiter.

On early Sunday morning, Saturn, Mars, Venus and Jupiter will all be visible from Earth and will appear to be in a straight line, offering skygazers a rare opportunity to see “two planetary events for the price of one”. Venus and gas giant Jupiter – the two brightest planets in the sky – will get so close that they’ll appear to be nearly colliding, or look as if they’re “kissing”.

“Venus and Jupiter have been moving closer together over the past several weeks, so this romantic spark between them has been brewing for some time,” astrophysicist Dr Brad Tucker, from The Australian National University (ANU), said.

“On the morning of Sunday 1 May AEST, they will appear to be so close that they’ll look like one object, or appear as if they are kissing. Similar to what Jupiter and Saturn did at the end of 2020.

“Although Venus and Jupiter get close to one another every few years, this time there is also is pretty rare, watching from afar like the creepy neighbour next door.”

No special equipment is needed to view the spectacle, just cast your eyes to the skies to take in the magic.

“From about 4:30am until sunrise, look towards the east and you’ll be able to see Venus and Jupiter appear as one planet,” Dr Tucker said. “If you have a telescope, a pair of binoculars or a decent camera, then you’ll get an even better view.”