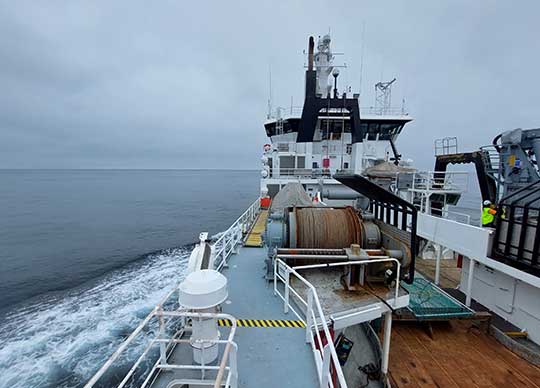 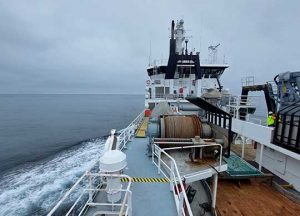 The RV Tangaroa on its way to Macquarie Island, Photo: CSIRO.

A significant mission to retrieve 27 seismometers from the rugged ocean floor near Macquarie Island in the Southern Ocean will unlock the secrets of the Earth’s inner layers and what triggers underwater earthquakes and tsunamis.

The three-week return voyage has been more than 12 months in the making, after the seismometers were deployed in October 2020.

The instruments on the ocean floor form a giant telescope pointing to the Earth’s centre and have been collecting data that will provide vital information about some of the Earth’s most violent underwater earthquakes.

They could also help scientists understand future earthquakes and tsunamis that might affect coastal populations in Australia and New Zealand.

The ‘ground-breaking’ trip also traverses some of the world’s steepest mountain ranges to ocean depths of more than 5.5 kilometres in a remote area known as Macquarie Ridge, halfway between New Zealand and Antarctica.

The steepness of the Macquarie Ridge slopes exceeds those of the Himalayas, Alps or the Alaska Range. 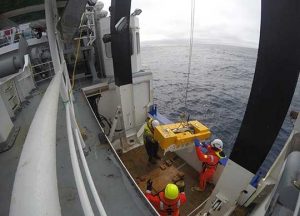 Crew on RV Tangaroa retrieve one of the seismometers, Photo: Joshu Mountjoy, NIWA.

“These devices record the motion of the ground continuously, from distant earthquakes, storms, whales, and other phenomena due to the ocean-atmosphere-solid earth system interaction, to earthquakes in the region itself,” Professor Tkalčić said. “The most exciting pay-off of this project may be that it could help us add missing pieces to one of the biggest puzzles in plate tectonics – how subduction begins. It’s in an area where the Australian plate meets the Pacific plate, but it’s not known as an active subduction zone, so these earthquakes are still a mystery to us.”

The mission to map the seabed has been a challenging expedition. Heavy seas meant crew on the initial voyage last year were thrown from their bunks despite the anti-roll ballast capability of the research vessel RV Investigator.

“The instruments have been surrounding Macquarie Island, a region in the Southern Ocean’s Furious Fifties latitudes renowned for its extreme seas and weather,” Professor Tkalčić said. “The weather was often merciless during our instrument deployments. We faced gale-strength winds and waves that forced us to ‘heave-to’ or shelter in the lee of Macquarie Island for roughly 40 per cent of our time in the study area.”

The next step will be to analyse the data from the seismometers that will hopefully unlock the secrets of how the Earth’s plates collide.

“Scientifically, the most exciting pay-off of this project may be that it could help us add missing pieces to one of the biggest puzzles in plate tectonics – how subduction begins,” Professor Tkalčić said. “Researchers have grappled with this question for decades, probing active and extinct subduction zones around the world for hints, though the picture remains murky.”