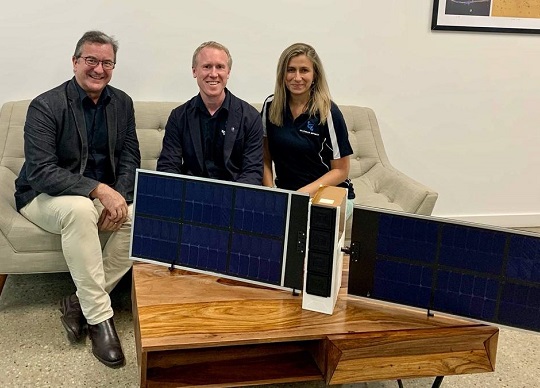 “We have signed a contract to launch six Fleet Space Centauri nanosatellites on our Eris rockets in 2023,” said Gilmour Space CEO, Adam Gilmour. “This is a great example of how Australian space companies are scaling and partnering to compete in the global space market.”

“Today’s announcement is the beginning of an ongoing launch service relationship as we work towards our planned constellation of 140 satellites,” she added. “We are building a strong portfolio of launch service partners, and we are very excited to have Gilmour Space as one of them.”

“As a country, we are highly reliant on space technologies from other nations and it’s time to realise that we can have critical sovereign capabilities in satellite development and launch here in Australia,” said Ms Tata Nardini.

Mr Gilmour agrees. “Covid has shown how important it is to have access and control over the technology that we rely on. Sovereign satellite and launch capability will allow us to protect our assets in space and our way of life.”

According to Blackbird partner, Rick Baker: “Gilmour and Fleet are leading the way forward through great technology and big ambitions. We’ve been impressed with both companies’ traction and see this partnership as a milestone for the maturing space industry in Australia. It’s fantastic to see leaders like Adam and Flavia joining forces to scale further and raise our collective ambition.”