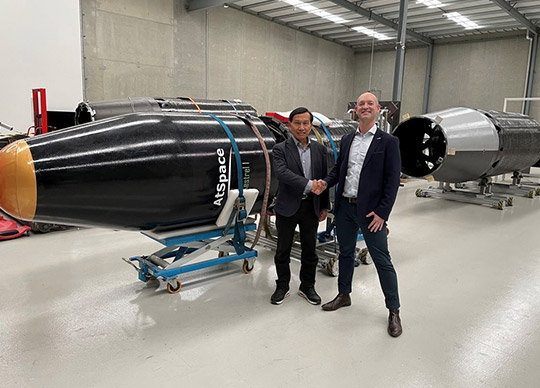 Image: Dr. Yensen Chen, CEO of ATSpace and Lloyd Damp, CEO of Southern Launch, in front of a Kestrel I rocket.

ATSpace and Southern Launch have announced the Australian Government has granted approvals to launch two suborbital “Kestrel I” rockets from the Whalers Way Orbital Launch Complex in the coming months.

The VS02 and VS03 missions will fly the experimental Kestrel I rockets along sub-orbital trajectories to incrementally test the rocket design under different operating conditions. On the ground the collection of rocket launch noise data during lift-off will contribute valuable knowledge into the planned future operation of the Whalers Way Orbital Launch Complex.

Southern Launch’s Chief Executive Officer, Mr Lloyd Damp, highlighted the complex work taking place to support the launches and the significance of the data to be collected.

“We have seen significant progress across Australia’s space industry over recent months. For Southern Launch to be supporting Australia’s most complex commercial space launches from our site is a remarkable achievement by my proud team.

“The VS02 and VS03 launches will provide a significant amount of data that will be used to inform best practice during future launch campaigns and the development of South Australia’s space industry”.

“Southern Launch is committed to advancing a sustainable local space launch industry in Australia. This industry will create new high-paying, skilled jobs for regional and rural Australians and in doing so, will advance Australia’s science and technology capabilities.”

South Australian Space Industry Centre Chief Executive, Richard Price says “South Australia is proud of our history in the early period of space launch.  Space launch infrastructure and capability is important for the continuing growth of our collaborative and innovative space ecosystem , which is creating unprecedented opportunities for local businesses to deliver across the entire space value chain.”

The Chief Executive Officer of ATSpace, Dr Yen-Sen Chen, expressed the significance of the coming two suborbital launches for demonstrating the technical performance of the Kestrel I systems and paving the way for ATSpace becoming a leading player in Australia’s emerging space industry.

“These two suborbital launches will provide us with valuable data to validate our future Kestrel V orbital design. They are the gateway to ATSpace’s growth and future investment in Australia and jobs for Australians.”

“Launching into space is a challenging task for any launch vehicle company. It’s only possible to attain the technical maturity through well-planned test launches. VS02 and VS03 are part of the equation for us to reach that status.”

AT Space and Southern Launch acknowledge and appreciate the significant support of the South Australian Government and the Global Australia program within the Australian Trade and Investment Commission.