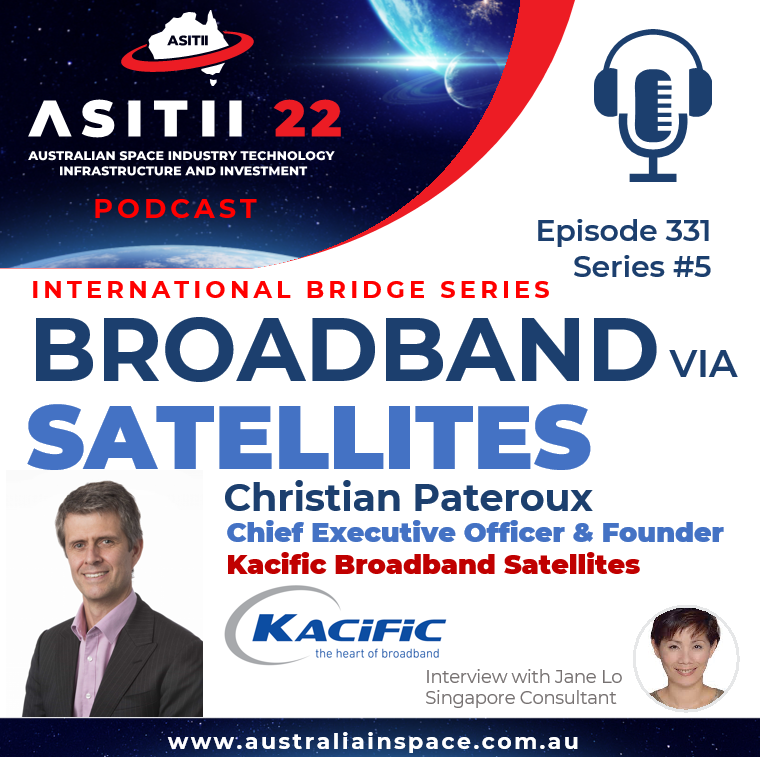 Christian Patouraux has over two decades’ experience in the satellite industry.

He went on to develop satellite offerings for new markets in Asia Pacific as head of special projects for MEASAT. Christian was also Executive Vice President and Chief Development Officer at O3b Networks, where his work was fundamental to launching the company’s maritime business.

Kacific’s first satellite, Kacific1, was launched into geostationary orbit on the 16th of December 2019. Once operational, Kacific will offer direct internet access, via wholesale channels, to government agencies, institutions, businesses, community groups and households within the satellite’s total footprint area.

Christian holds a Master of Engineering from the Polytechnic school at the University of Brussels, a Master of Aeronautics / Turbomachinery from the Von Karman Institute, Belgium and an MBA from Insead.

In this podcast, Christian shares the latest developments in broadband via satellites, from technology and regulations to trends, with implications for costs and business models.

Referencing the Ukraine crisis and Elon Musk’s Starlink, he gives an overview of the key features of a low-earth orbit system (or “LEO”, launched by for example Starlink) and the geosynchronous satellite (or “GEO”), and how Kacific’s GEO satellite delivers affordable high-speed broadband access to the rural and remote parts of the world.

Christian also references the Covid-19 pandemic, which highlights to governments the critical need for rural connectivity, and how satellite broadband is able to respond to the challenge and bring communication access to less populous regions.

In addition to emergency access, Christian also summarises the trends in services provided by satellite broadband – including disaster recovery (observed in the Ukraine crisis), backup and redundancy, and the role of satellite broadband in the coming 5G era.

In comparing satellites to fiber-optic operators, he clarified that both face similar regulatory requirements. However, satellite broadband addresses certain backhaul challenges faced by fiber-optic operators in a cost efficient way, and hence offers a competitive advantage, in particular for markets in the remote and rural regions.