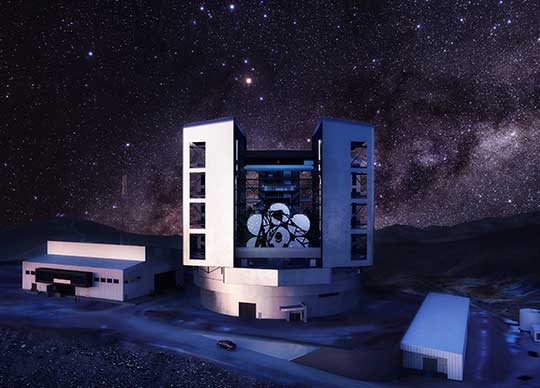 Australian astronomers hunting for Earth-like planets outside our solar system and investigating the dramatic life and death of stars have been given a major boost.

The newly released 2020 United States Decadal Survey on Astronomy and Astrophysics has listed the revolutionary Giant Magellan Telescope (GMT) as one of its top priorities. The recommendation opens the door for major funding for the construction of the telescope.

The GMT, being built by an international team including researchers from The Australian National University (ANU), is one of the most exciting projects in the world of astronomy.

Sited in the high, dry Atacama Desert in Chile, one of the best places on the planet for exploring the Universe, the GMT represents a new generation in ground-based extremely large telescopes. The telescope will use seven of the world’s largest mirrors and the most advanced optics technology to see billions of light years away.

ANU is a major partner in the GMT project and researchers from the University are involved in the design of the telescope’s adaptive optics system, which removes atmospheric blur and gives GMT the sharpest possible images.

Professor Matthew Colless from ANU, a long-time member of the international GMT team, said Australian researchers were a playing a major role “in making the GMT’s unrivalled vision a reality”.

“ANU scientists are designing and building an integral-field spectrograph for the GMT. This will allow scientists to take images and measure spectra so we can better understand supermassive black holes, the birth and evolution of galaxies, and search for planets outside our solar system,” Professor Colless said.

“ANU researchers are also working with fellow Australian scientists to design and build an optical fibre system that will give GMT the widest field of view of any of the giant new telescopes.

“All of this is a major benefit to Australian research and researchers and will ensure we remain a global leader when it comes to astronomy and astrophysics.”

“This is another example of Australia playing an active role in a major international research project,” he said.

“Our scientists and engineers will continue to design and construct significant components of this incredible telescope, and Australian astronomers will be among the first in line to access the Giant Magellan Telescope and all its possibilities.”

ANU Vice-Chancellor, Professor Brian Schmidt, who won the 2011 Nobel Prize in physics for his work on the expanding Universe, welcomed the US announcement and congratulated the Giant Magellan Telescope consortium.

“My own work on the expanding Universe will benefit significantly from the power of the GMT,” Professor Schmidt said. “The GMT is an incredible innovation; it could one day be the basis of work that leads to another Nobel Prize.

“It’s really encouraging to see the US astronomy community recommending the GMT for major funding by the US Government. It will take the construction of the GMT to the next level and help us unlock a Universe’s worth of discovery.”

Astronomy Australia Limited (AAL) is a non-profit organisation, whose members are Australian universities and research organisations with a significant astronomical research capability.

ANU and AAL are equal partners in the Giant Magellan Telescope project.