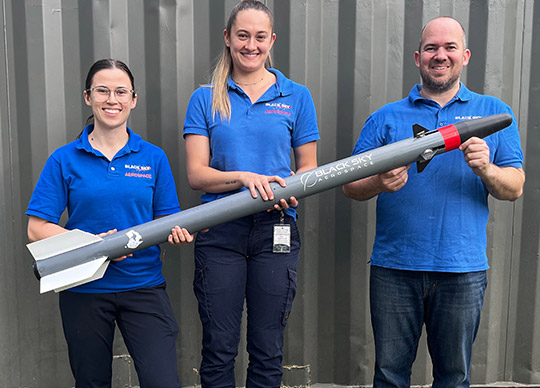 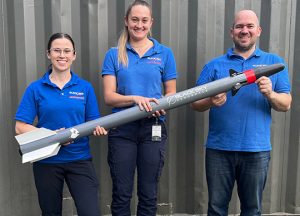 Image 1: BSA avionics engineers Jessica Bender (L) and Yas Sellwood, and CEO Blake Nikolic (R), with one of the company’s guided weapons now cleared to fly at what is believed to be Australia’s first civilian-owned and operated missile range.

Black Sky Aerospace (BSA) has received approval to test guided weapons from its Southern Queensland launch site in what is believed to be the first ever such approval for a civilian operator.

The Queensland rocket company will start advanced testing of its guided weapons in coming days as it forges ahead building a sovereign Australian defence capability. Chief Executive Officer Blake Nikolic said that previous launches were conducted under the restrictions of civilian launch, and the new approval will allow the guidance system to be tested, integrated and refined to a much higher standard.

“This is a major milestone as our locally designed and built system moves towards qualification for availability to approved allies and partners,” Mr Nikolic said.

“The continued hostility in Ukraine and declining stability in the Indo Pacific region make this program a vital part of developing Australian Industry Capability,” he said.

“The approval comes only two months after BSA successfully tested rockets with an integrated launch pod allowing unprecedented rapid development of an Australian guided weapon platform. Under current plans, development of a local guided weapon solution is not planned to start for up to five years. We at BSA don’t believe we have that amount of time, so we started work at the beginning of this year,” Mr Nikolic said. Image 2: BSA avionics engineers Jessica Bender (L) and Yas Sellwood demonstrate the new canards of the company’s guided weapons to CEO Blake Nikolic (R). BSA will begin advanced testing of its guided weapons at its Southern Queensland site after receiving what is believed to be Australia’s first civilian-owned and operated missile range

BSA Chief of Launch Operations, Spiro Stamatopoulos said that operation of this type of system requires special approvals from the Federal Government, including from the Civil Aviation Safety Authority, or CASA.

“Rigorous scrutiny on our processes and simulations had been undertaken over many months to ensure launching guided weapons could be performed safely,” Mr Stamatopoulos said.

“I’d like to pay tribute to the CASA regulators who worked hard on this first of a kind approval which clears a pathway for future developments,” he said.

The BSA team demonstrated the weapon guidance system at Australia’s Land Forces industry exhibition in October, highlighting how a sovereign solution is not only viable, but a reality.

“The situation in Ukraine continues to inspire us to deliver home-grown capability. It is imperative we build resilience now while no adversary is at the gates as happened in Europe,” Mr Nikolic said.